KU athletes have work cut out after first day

Kansas University heptathlete Chelsea Helm, right, clears an obstacle in the 100-meter hurdle event. Helm is in 12th place after Day One of the Kansas Relays on Wednesday at Memorial Stadium.

This morning the 81st edition of the Kansas Relays got underway at Memorial Stadium.

For the final time in their high school careers, Lawrence High twins Kristina and Jennifer Taylor will take their shot at the Kansas Relays. Join high school sports editor Matt Tait, LHS beat writer Jesse Temple and the Taylor twins as they discuss their chances at this year's event. 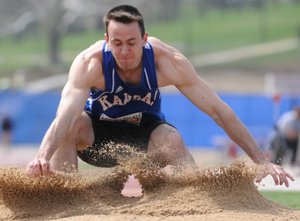 KU's Jacob Breth hits the sand pit after taking a run at the long jump. Breth sits in seventh place after the first day of the decathlon at the Kansas Relays on Wednesday at Memorial Stadium.

Four events and five hours in, Kansas University's Jacob Breth must have felt he had a crick in his neck from staring up at the decathlon field above him Wednesday afternoon during the 81st annual Kansas Relays.

The 6-foot-4 sophomore stood in 10th place out of 11 competitors and needed something - anything, really - to give him hope before heading off for Day Two.

"I thought I would be doing a little bit better," Breth admitted afterward.

Taking his mark in lane seven for the 400-meter dash, his final event offered that chance to salvage the day.

When the starter pistol popped, Breth blazed down the track. Less than 51 seconds later, he was back in the decathlon hunt.

Breth won his heat with a time of 50.74, took third overall in the 400 and moved up to seventh place in the decathlon standings.

"I kind of wish I had a teammate here because all these other guys do," Breth said. "But I love running here. It's the atmosphere in the stands that makes this great."

Breth's teammate was supposed to be senior Josh Kirk, who won the decathlon crown last year at Memorial Stadium. Instead, Kirk did not participate because of an injury, meaning every male athlete in the field was an underclassman.

On the women's side, KU sophomore Chelsea Helm felt the same frustration as Breth. Despite setting a personal record in the high jump with a leap of 1.50 meters, she still found herself in 12th place out of 14 at day's end.

"It stinks when you come out and this is your one chance to work on it, and it ends up like this," Helm said. "But, it's not conference, so hopefully I'll improve by then."

Helm did her best to stay positive, noting that one or two bad events don't always make or break the seven-event heptathlon.

"The good thing is, it's a two-day thing," she said. "I have (today) to come back and improve and salvage some of my score."

The decathlon picks up again at 8:30 a.m. today with the 110-meter hurdles followed by the heptathlon long jump at 9.