It's been three months since the Kansas football team knocked off Virginia Tech and was crowned Orange Bowl champions. Tonight at Memorial Stadium, the Jayhawk faithful caught their first glimpse of KU for the 2008 season.

Fans flip from hoops to football

Over the past 24 hours many Jayhawk fans have turned their attention from the hardwood to the gridiron in what has been a seamless transition from one season to another. 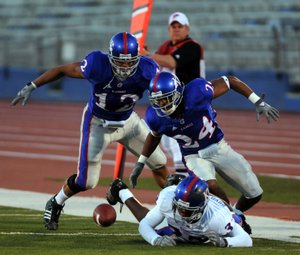 Decked out in KU gear, incoming running back Jocques Crawford watched the spring game Monday from the stands.

"Watching the spring game kind of hurt," Crawford said. "I wanted to be out there bad."

Crawford is finishing up at Cisco (Texas) Junior College and will move to Lawrence on June 1. KU coach Mark Mangino has said more than once he expects Crawford to make an immediate impact. Crawford said Monday he's shooting for the starting job.

KU defensive end John Larson did not suit up Monday because of illness. Junior Maxwell Onyegbule played defensive end on the Blue team along with Russell Brorsen.

In addition, the three regular starters who missed the entire spring were dressed out but didn't play. Center Ryan Cantrell, linebacker Joe Mortensen and safety Justin Thornton all are recovering from leg injuries, but all walked around on the sideline.

Freshmen Rell Lewis and Ryan Murphy both worked on catching punts. But there was no chance to return - KU's traditional spring game rules call for no live special teams to minimize injury risks.

Both players, however, dropped at least one fair catch.

Reserve offensive lineman Jason Hind no longer is listed on the roster. : Gary Green lined up as a wide receiver and caught five passes for 34 yards. He played cornerback in 2007. : Sophomore Phillip Strozier was working at safety. : Arist Wright had 10 tackles and a pass break-up in the end zone, after missing the Orange Bowl due to injury.

What is the deal with the punt returners? Given the volume of players on a Div I roster that possess outstanding athletic skill, why can't Mangino find someone that can catch a freakin' punt?

It shouldn't be a problem.Daymond Patterson is on his way this summer. He's a small and very, very shifty guy that specialized in punt returns even in high school. When he fields a punt ankles just give up and start breaking all over the field trying to catch him.With our troubles at that position it looks like he'll almost certain skip the redshirt and be our specialist as a true freshman. Despite that position looking bad in the Spring game, I expect Patterson to make us one of the most dangerous punt returning teams in the nation.

Can't wait for Crawford to get here. He's the missing puzzle piece to make this offense run like a Champ.

Russ Rob was standing behind me in section 9-10. I have heard him say in the papers, that he is a bigtime football fan.

Russ Rob would probably make a nasty safety. With his ability to steal the ball?

Collins was a TE in High School

No he wasn't... He played both sides of the ball as a wide receiver and free safety

Wasn't Michael Lee thinking about going out for football after his bball career was over? I think he had a year of eligibility or something like that.

I thought I read somewhere that Sherron was a QB...? I know Darnell Jackson was a tight end...could you imagine throwing up a jump ball to him in the corner of the end zone?!And yes, I remember Mike Lee talking about playing a year of football after he was done with basketball, but I don't know why it didn't pan out.