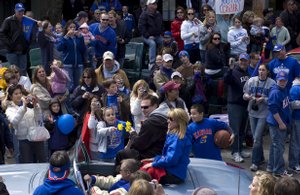 Sunday's parade drew about 80,000 people, according to a police spokesman, who called the tally "unofficial." Earlier reports estimated about 100,000 fans showed up.

They were wrapped in blankets, cupping coffee in their hands and doing just about anything to keep warm.

But when the team puttered down Massachusetts Street with players perched atop convertibles, the cold didn't matter. Fans mobbed players' cars, shaking their hands and snapping on-the-go photographs.

Lawrence resident Stan Ring grabbed a parking spot between Eighth and Ninth streets Saturday night. He waited for the parade to begin with his wife, Mary Ann, his daughter Elizabeth Hall, her husband Brian and their two children, Nathan, 7, and Garrett, 4.

They planned early "just so we could have a good place here today, get up close to the action, so my grandkids can see," Ring said.

The Halls drove to Lawrence from Olathe, said Elizabeth, a 1997 KU graduate.

"It's just really fun," she said. "It's fun to share it with my kids and my parents. It was nice to finally make it to the end."

Scott and Kathy Gates snagged the last parking spot available in a parking lot at 10th and Massachusetts streets. Their two sons, Michael, 10, and David, 8, sat in the bed of the truck, waiting for their Jayhawks, and more specifically, their favorite player, Mario Chalmers.

Families and children populated every sidewalk, a marked difference from the boozy bashes that followed KU's victories in the NCAA tournament.

"Families can come to do this," Kathy Gates said. "Monday was a school night. By the time the game was over, a lot of kids were in bed."

One of Lawrence's newest families celebrated the win with perhaps the parade's youngest participant.

Angela and Isaiah Eberhart welcomed their daughter, Kaidren, on Saturday, and by Sunday had christened her a Jayhawk. Kaidren was released from the hospital at 1 p.m. yesterday, and was soon wrapped in a KU blanket - and a few others to keep warm.

"We bundled her up, and we were out for a couple of hours. So (the parade) was her first destination," Angela Eberhart said. "She was great. She slept. She was totally out, and then the band got real close. Then all of a sudden she started getting a little fussy."

Second-floor windows were open and fans stuck their heads out to watch the massing crowds, before the parade began. Music blared from cars and street musicians entertained passersby.

Felicia Miller sat with her parents on their flatbed truck outside Ernst and Sons Hardware, 826 Mass., which is owned by Miller's father-in-law, Rod Ernst. They watched the parade celebrating KU's 1988 national championship in virtually the same spot.

"The national spotlight that has been on Lawrence and KU, anywhere you go, people know about the university and what it stands for," Miller said. "There aren't may schools that have a football team and a basketball team that are tops at the same time. The recognition for Lawrence, Kansas, is outstanding."

KU students Ashley Trent, Mike Courtney and Beau Winfrey found an open spot at Seventh and Massachusetts streets. They were surprised they were able to snag such prime real estate.

"I'm pumped. I'm really excited," Trent said, as she did homework before the parade. "We're trying to hit as many events as possible."

The group planned to migrate from its spot - where the Jayhawks would pass at the beginning of the parade - to Allen Fieldhouse, to watch the basketball team's awards ceremony.

Courtney, a graduate student from Boston, felt lucky to have seen KU win the national championship.

"This is the best sports year of my life. It's like coming from championship city to a championship school," he said, listing off New England's recent athletic successes, such as the Red Sox's World Series victory.

It was a good day for business, as well. Bars were packed before the parade, and fans were hungry for anything and everything KU. After the parade, a line formed outside Joe-College.com, 734 Mass., a T-shirt vendor, as fans were eager to commemorate the victory. The store was at capacity and had an employee allowing customers in only as others left.

The crowd was well-behaved and there were no serious problems, Lawrence police Sgt. Michael Monroe said.

"Everything went very well. Everybody was having a good time," he said.

Traffic near the downtown area moved slowly, but that was to be expected, Monroe said.

Few disturbances were reported, but at least one parade-goer suffered a bruised foot after a car carrying Chalmers ran over her foot.

The 12-year-old girl's mother, Lois Orellana, was upset that no one helped her daughter, who walked from Massachusetts Street to Lawrence High School to meet her mother.

"She took a picture, and the next thing she knows, she heard a crunch," said Orellana, who took her daughter to Lawrence Memorial Hospital for treatment.

The parade route took the team, which followed the KU pep band and cheerleaders, south on Massachusetts Street from Seventh Street to 19th Street and west on 19th Street to Naismith Drive. The team was met by some 10,000 fans at Allen Fieldhouse for one last chance to commemorate an unforgettable season.

The above comment by Strikewso is exactly the type that insensitive disgusting warped minds of purple and tigger fans have been spewing. If it is an attempt at a joke, it's a really crappy joke. Mario may be very aggressive on the basketball court, but implying that he'd intentionally run down a 12 yr old little girl is just stupid.That comment does NOT represent my feelings. Yesterday was a wonderful day and 100,000 people got along great and behaved themselves. They represented Jayhawk fans well. Just as I would expect.Sadly one tragic incident occured and my prayers and best wishes go out to the Orellana family. I am positive that many people would have been more than happy to help if they had been aware of what happened. Unfortunately when there is a mass of people that large, it's impossible to know all the details of what is happening around you. Many are doing all they can do to take care of their own loved ones around them.Get well soon little Orellana child. I bet Mario will sign your cast if you call the basketball office and ask.

"If you're in the road, you're going to be road kill." Especially if Mario Chalmers is in the car!

Tragic??? You need a dose of reality. Current events in Africa are tragic. Someone getting a bruised big toe (why she put her foot in the path of the tire we'll never know) while attending a victory parade is comical. But go ahead and send your prayers if you wish. What the kid really needs is instruction to stay out of the way of moving vehicles. Oh yeah, Mario wasn't driving in his own parade.

I'd like to know who leaves their 12-YEAR OLD KID to go to a parade with 10,000 people by herself. The article said she had to go meet her mother at LHS. Sorry, but that's just irresponsible parenting.

My 6 year old little girl came within a half a second of getting her foot run over by the car carrying Chalmers. I had to grab her and pull her back. I don't ever remember the crowd being allowed to go touch the players and the cars in previous parades (in 88, and 91). But there was definately a need for parental supervision.

5DecadeHawk- Did you complete your degree in Drama?

People need to have more common sense....think!....duh!....dont come in here and complain about things when it is you who are too braindead to use a little common sense...wow!

On another note ... the atmosphere downtown was awesome!. You could have emptied Memorial Stadium and AFH onto the streets and it still would not have added up to the masses that came out for the parade.What a year!

Brickwall1,You could get right up to the players in the '88 parade. I remember skipping class that day to attend. With a little pushing and shoving to get up to the front, my buddies and I all got to slap hands with Milt Newton. It was the highlight of the day for us at the time.I wish I could have been in Lawrence for this one too.

Rex Walters just became USF's head basketball coach.He assists two years at Valpo.He assists a year at Florida International.He head coaches one year for at FI and goes 16-15.And he's a California guy, if I recall correctly.I like Rex and I think he could be a good coach some day, but...Bill Self turned programs around before he got his next job. It is hard to believe USF can't do any better than Rex, at this stage of his career.Good lord, all of KU's current assistants would be better choices than Rex, wouldn't they? Maybe USF is too small a school for assistants at schools like KU to consider. Maybe they won't consider anything that doesn't have "University of" attached to a state. Rex is right about two things though: 1)USF has those Russell teams in its past; and 2) its in San Francisco and that is a great city in a state with a lot of high school players.If Rex IS a good coach waiting to happen, he's going to have the last laugh on quite a few guys who can't get their first D1 job.

The reason KU is so good for so long is that Williams and Self are great recruiters.....Self is a better recruiter than Williams and he is a better coach it seems.....wow...hemmeway did an awesome job luring him away from Illinois and selling KU when we had no AD in place....thanks doc!

Is KU really that hard to sell?