The Kansas University softball squad won the first game against Texas, 8-1, but lost the nightcap, 2-1. 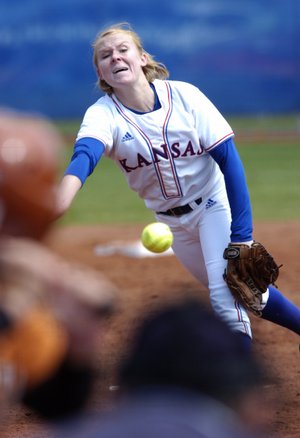 Kansas University's Valerie George delivers a pitch against Texas. The Jayhawks split a doubleheader with the Longhorns on Sunday at Arrocha Ballpark. 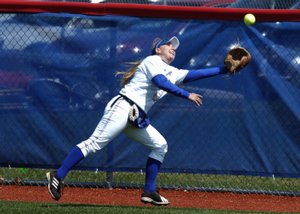 McCaulley, a junior outfielder, elevated her batting average over the .400 plateau as Kansas University divided a softball doubleheader with Texas on Sunday.

Officially, the 5-foot-7 native of Victorville, Calif., is batting .402. That's lofty territory considering she hit only .265 in her first season with the Jayhawks last spring.

"I had my first go-round last year," said McCaulley, who spent her freshman year at Odessa, Texas, Junior College, "and I regained my confidence last summer."

As the only slap-hitter on the Jayhawks' roster, McCaulley was usually at the top of the order last spring. But coach Tracy Bunge has been using her behind leadoff hitter Stevie Crisosto lately.

Although she collected four hits Sunday, more remarkable was her base-running. In the first inning of the second game, she dumped a single into left field, then stole second and third bases.

Minutes later, after Val Chapple had reached first after being hit by a pitch, Chapple and McCaulley executed a double steal that enabled McCaulley to steal home.

"It's been awhile," McCaulley said when asked the last time she had stolen home.

Not known as a base-stealer, her three thefts in the first inning doubled her season output in that category and were probably a career first.

"I can't remember ever doing that before," she said.

As it turned out, McCaulley's steal of home was the only run the Jayhawks managed off Texas ace Megan Denny, who allowed only four singles and fanned 11.

"It's nothing fancy," Bunge said of George's pitching. "She's not going to blow the ball by anybody. She's in and out and has a nice change, and she doesn't throw many balls over the plate."