After being swept last weekend in Baylor by the Bears, the Kansas baseball team did a little sweeping of their own against Texas Tech. 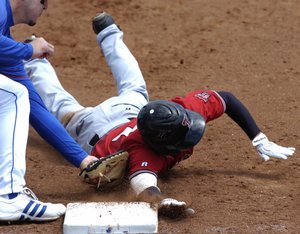 It had been two years since Kansas University's baseball squad last swept a series against a Big 12 Conference opponent.

With a few fans sporting brooms Sunday at Hoglund Ballpark, KU made it a clean sweep of Texas Tech with a 5-2 victory.

"It's really hard to sweep anyone in this league," KU coach Ritch Price said. "The league is just so good, and the teams are well coached, it's extremely difficult. Today was a huge day for us : statistically, in the standings."

The victory catapulted the Jayhawks from 10th to seventh in the Big 12 standings.

Freshman Jimmy Waters put Kansas on top early with a lead-off home run in the bottom of the third inning.

Buck Afenir and Preston Land each had a two-run blast in the sixth.

"I think our offense this whole year has done a pretty good job of answering back when the other team has scored," Land said. "It showed really well this weekend. I think our offense, overall, is pretty confident right now."

Allowing just eight runs against Texas Tech over the weekend has Price feeling better about his staff.

"That's the first time we've gotten three quality starts all year in the same weekend," the KU coach said. "We've had some weekends that we've gotten two. We've scored enough runs in every series to win two out of three, but our pitching hasn't quite gotten it done."

Might make the tourney with sweeps of TT and KSU! Probably the only way too!