Jayhawks head to Fieldhouse after parade

Today's championship parade filtered down Mass. Street and then proceeded south towards South Park. From then, it was on to Allen Fieldhouse where the 2008 team was introduced for one final time. 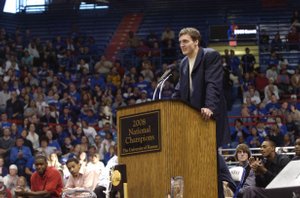 The frenzied celebrations of the last few weeks culminated Sunday night at Allen Fieldhouse, where more than 10,000 fans gathered to pay tribute to the Kansas University men's basketball team.

It was a busy day for Jayhawk fans, many of whom hurried from the victory parade on Massachusetts Street to the fieldhouse, eager to find a prime seat to an event billed as a celebration of the champion Jayhawks.

Tanner Brous, a 2006 KU graduate, arrived with his wife, Allison, around 4 p.m., after watching the parade near It's Brothers Bar & Grill, 1105 Mass. He said between 2,000 and 3,000 people were waiting to enter the fieldhouse, which opened early to accommodate the fans. He said the waiting fans were "mellow" but "on edge," hoping to get the best seats.

"Once the doors opened, the crowd condensed," he said, calling the scene chaotic.

"I thought maybe we had a basketball game tonight when I saw the lines," said athletic director Lew Perkins, as he addressed the crowd.

The Brouses found seats about 10 rows away from the basketball court.

"I've been a KU fan for 20 years, and I've been waiting for this my whole life," Brous said. "It's going to be emotional. I've got the camcorder with me. I just want to see all the seniors."

And it was a night for KU's five seniors, Rodrick Stewart, Russell Robinson, Sasha Kaun, Darnell Jackson and Jeremy Case. The players gave speeches, thanking the fans for their support. Later, they were named the recipients of the Danny Manning "Mr. Jayhawk" Award, which is usually given to just one player.

The players were introduced to thunderous applause, with guard Mario Chalmers, the hero of last Monday's national championship, receiving a rousing cheer that shook that stands. The crowd, which filled about 75 percent of the fieldhouse, continually cheered as a video recapping the season played on the scoreboard. The biggest cheers, of course, were reserved for the final moments of the championship game against Memphis.

Topeka resident Brian Kelly came to the banquet with his father. They battled crowds in the line to get in, as well, but that didn't faze Kelly.

"I'm just proud to be a Jayhawker. It's an amazing occasion. It's very historic," he said.

Gratitude was the message of the evening. All five seniors gave thanks to Jayhawk fans, coaches and their families.

Coach Bill Self said, "I don't know if anyone deserves to have this much and be treated this good."

Tricia Beelner, a student in the School of Pharmacy, was soaking in the atmosphere. The native of LeMars, Iowa, said she came to KU as an undergraduate largely because she is a big basketball fan. Sunday night made it all worth it.

"There's no atmosphere like the fieldhouse," she said. "Especially when you're national champions."

From ESPNKansas sophomore forward Darrell Arthur, for the most part, had a disappointing tournament. In almost every game he showed flashes of brilliance, especially on the offensive end. But often he disappeared for large stretches of the game. Some of that is passivity. At other times, the Kansas guards just ignored him. In the title game, however, Arthur was Kansas' best player, scoring 20 points and grabbing 13 rebounds. Arthur has excellent offensive skills, with the quickness to beat bigs and the ability to shoot over smaller defenders. When he gets the ball, good things usually happen. While scouts have been concerned all season about his uneven production and lack of rebounding, there's no questioning his talent. One scout compared him to the Hornets' David West and said he'll thrive in the NBA. "Guards dominate college basketball," the scout said. "Especially at Kansas. I think you'll see a more productive Arthur in the pros." Currently, we have him ranked as the No. 16 prospect in the draft. At times he was ranked as high as No. 8 this season. With great workouts, he could move himself back into the lottery. But his best option might be to stay in school one more year and try to dominate as a junior. Next year's draft class isn't that impressive, so it might behoove him to stay at Kansas. ¢ Kansas freshman center Cole Aldrich is the prospect who probably did the most to help his draft stock for next year. The big guy was awesome in 16 minutes against North Carolina -- blocking shots, ripping rebounds away from Tyler Hansbrough and attacking the rim. He's got size, length and an NBA body, and he looks like he has a good motor. He could be the future for Kansas inside.

If Arthur took that writer's advice about next year he could pair with Aldrich and with the 6'10 European I read about yesterday and the 6'10 Morris kid look at what could conceivably happen next year. I think that the picture is very bright for the next year or two with just what we seem to have. All that is needed is for the new players to buy in to Self's system early so it can be continued with Arthur taking a bit more of the scoring load on his shoulders.Rock Chalk, Jayhawk as Wilt finally said.

Aldrich as an NBA prospect already? You've got to be kidding me. Let him play more than 10 min/game in a season first.

oldboy...I want to hear more about this European kid you mentioned.

Why wouldn't Aldrich be a pro prospect? How many legit 6'10" guys do you see with the kind of court awareness he has, or the ability to improve as quickly as he has? Of course he's a prospect. That doesn't mean he'll be ready after another season. It means he's being looked at as a potential pro.Also, Arthur's championship game probably sealed his professional fate. Before the game he was projected to late first round. Now, he's potential lottery, depending on his workouts. The virtual rule is that if you're gauranteed lottery money, it's a no-brainer, your gone. He's not guaranteed that yet, so there's a slim chance he could come back, but I doubt it.

European player??? As far as I know we do not have any Euros coming in. I know we don't have a scholly left over. Not with the two JUCOS, the Morris twins, Travis Releford and Quintrell Thomas.

We would have one more scholarship if we lose Rush, Arthur, AND Chalmers, plus the 5 seniors. That's 8 scholarship players out, and six coming in. With the one scholarship lost due to penalties, we would have one left if all 3 left early. I also think one or two guys currently with scholarships might lose them or give them up if there were a need for a big recruit - I think Brady may be in that situation.

How big is Quintrell Thomas?

QT is 6'8". The Euro was probably referring to Ater Majok. We're not likely to get him, and frankly I'd rather have the scholarship for a loaded 09 class.

We have five seniors so five spots are available. I've seem to remember that we lost some scholarships, courtesy of the NCAA, but sadly I have no solid information how that is impacting this year or will impact next year.Rush is pretty much gone so that gives us six spots. We've already have six recruits coming in already. If Arthur doesn't leave, and I would dearly love to see him stay, I'm not sure we have any additional scholarships to give - assuming Sherron & Mario do not leave. I think what Bill wants in another post player is 5 more fouls. Aldrich is the only true center we have on the roster though Markieff at 6'10 can fill in. Being deep in the post helped win us a national championship. Plus match ups are everything from time to time. Team to watch out for next year in the big twelve - Oklahoma. With a point of Willie Warren, who KU wanted dearly, and a lottery pick for their big man, they are going to be tough.

OU will always have to overcome their Krybabyshewski protege coach.........Not sure he's that much better than The Amazing Quinn.