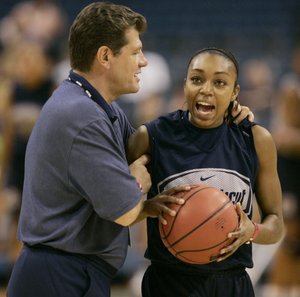 Connecticut coach Geno Auriemma, left, talks with Renee Montgomery. The Huskies practiced Saturday in Tampa, Fla., and will take on Stanford at 6 tonight.

Tampa, Fla. — Connecticut coach Geno Auriemma says one player in particular was crucial in getting the Huskies to the Final Four for the first time in four years. Her name is not Maya Moore.

"We're here," he said Saturday, "because Renee Montgomery got us here, with a lot of help."

The 5-foot-7 junior averaged more than 14 points and four assists and played both guard spots while leading top-ranked UConn to a 36-1 record.

"She plays at both ends of the floor, defensively, offensively. She's obviously the leader for them on the court," said Stanford coach Tara VanDerveer, whose Cardinal (34-3) play UConn on tonight in the national semifinals. "She shoots well. She defends well. I think she has a great future, and she'll be a very tough matchup for us."

Teammates say Montgomery's attitude, as much as her game, has given the Huskies the feeling they are the team to beat for the national championship.

Whenever UConn struggles, Montgomery's steely blue eyes turn fierce, and everyone on the court knows the Huskies are going to win, forward Charde Houston said.

"Whenever you see that look, you know it's time to pick it up," Houston said. "We understand she's going to do everything she can do as far as making plays, and I think a lot of things that occur on the team run through her."

"She just has a fire about her and a confidence about her," Lobo said.