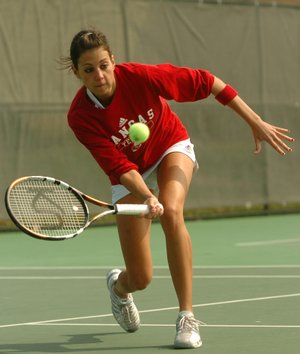 Kansas University's women's tennis squad continues to get strong performances from the No. 6 singles spot.

The latest showing was from Stephanie Smith, who subbed in for regular No. 6 singles player Lauren Hommell, who suffered a shoulder injury in KU's match Saturday with No. 4 Baylor.

"It was great to be out there playing again in the lineup," Smith said after the match at Robinson Courts. "I think she (Holmes) was struggling a little bit with the wind, and I just tried to take her out of her game as much as I could."

The Jayhawks had an opportunity to claim the doubles portion early on.

Hommell and Kunigunda Dorn won the No. 2 doubles match, 8-6, but No. 1 doubles duo Elizaveta Avdeeva and Edina Horvath and No. 3 tandem Maria Martinez and Magdalena Tokarczyk dropped their matches by the same score, 8-4.

"I was impressed with the way we came out today," KU coach Amy Hall-Holt said. "We came out real strong, and then Baylor started building confidence in their game. They're a good team, but we were right there with them."

After losing the first set 6-2 in No. 2 singles, Avdeeva attempted to send the match to a third set with a 4-1 lead in the second. Baylor's Taylor Ormond won the next five points to defeat Avdeeva in straight sets, 6-2 and 6-4.

KU will have to brush off the loss quickly as it plays host to Texas Tech today.