Nebraska quarterback Sam Keller, right, lays on the ground after being injured during the fourth quarter of the Huskers' loss to Texas. Keller suffered a shoulder injury and won't play Saturday at Kansas University.

Jayhawk Todd Reesing was named semifinalist for the Davey O'Brien National Quarterback Award. He'll miss this weekend's chance to face off against NU QB Sam Keller, who is out with a broken collarbone. 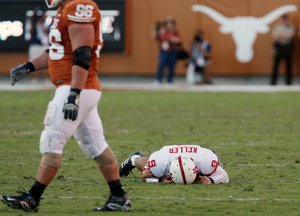 Nebraska quarterback Sam Keller, right, lays on the ground after being injured during the fourth quarter of the Huskers' loss to Texas. Keller suffered a shoulder injury and won't play Saturday at Kansas University.

Kansas University's football team has answered every challenge it has faced so far this season.

But here's a new one: a quarterback who is almost completely unknown.

Nebraska coach Bill Callahan, whose team is preparing for Saturday's game against the unbeaten Jayhawks, said Monday that NU starting quarterback Sam Keller is out for the season because of an injury to his left shoulder.

Keller was hurt in the Huskers' 28-25 loss to Texas on Saturday when he absorbed a big hit by UT defensive end Eddie Jones with 2:37 left. Keller was replaced by Joe Ganz, who will start against No. 8 Kansas on Saturday at Memorial Stadium.

"This creates an opportunity for Joe Ganz to step up," Callahan said Monday during the Big 12 coaches conference call. "He's ready to do that. He's prepared and trained for this particular role."

Ganz has played in three games this season, attempting just four passes. After Keller was injured, Ganz finished the Texas game and was 2-of-3 passing for 17 yards, including a four-yard touchdown pass to Maurice Purify.

Really, there's not much more film out there of Nebraska's new quarterback. Ganz, a 6-foot-1, 200-pound junior, was Zac Taylor's backup in 2005 and '06 but attempted just 13 passes in those two seasons, one while lined up as a kicker.

"We don't know a whole lot about him," KU coach Mark Mangino admitted Monday. "He has not played a whole lot. Just what we have of videotape on him, (and) some reports we got from spring ball in the summertime. But not really a whole lot."

Keller and Ganz fought for the starting quarterback job through the spring and summer, though the feeling all along was that Keller - an Arizona State transfer - ultimately would win the job.

He did, and in nine games completed 205 of 325 passes for 2,422 yards and 14 touchdowns. He threw 10 interceptions, though, and was unable to move the offense enough to make up for Nebraska's struggling defense. The Huskers are 4-5 overall and 1-4 in Big 12 play, having lost their last four games.

With Keller out, this will be the first time ever that Nebraska will prepare an offensive game plan knowing Ganz will be at the wheel. That alone creates a bit of mystery.

"I don't know how drastically different they'll be," Mangino said. "I'm sure they'll have some things that fit his ability. They'll run schemes that feature his strengths. We'll just have to do the best we can on videotape to evaluate their offense and what we know about Ganz."

The Huskers certainly have a tough task in Ganz's first start. The Jayhawks (8-0, 4-0) have the fifth-ranked defense in the 120-team Bowl Subdivision, allowing just 263.9 total yards and 10.3 points per contest.

Ganz told the Nebraska media after the Texas game that he would be ready if needed. Callahan, for one, thinks that proclamation is more than just talk.

"We lose a good player," Callahan said, "but we feel confident that we have another good player stepping up and stepping in."

Jayhawk Nation is calling for a BLUE OUT vs. Nebraska on Saturday. No crimson, no white, no gray...all KU fans in a sea of blue.

i'd 2nd that. Blue all the way. Go Jayhawks!

HE's in FIRST right now, keep it that way!

Payback time for all those Husker teams in the past that used to run it up on KU!

Speaking of a laugher, check out this website showing the worst college mascots in which Lil' Red makes an appearance at the #18 spot. Pardon some of the "spirited" language, but the gal is actually quite funny in some of the commentary:

KU is ranked NUMBER 1!!!! ....in the Sagarin rankings. - which are usually pretty acurate.

Oh and NO red!!!!! Bill Callahan is as good as gone at NU, and his attitude is reflecting in the way his team is playing.

Nebraska will score when KU sends out the history department on defense but will still only manage a field goal!!

I lived in Nebraska for 17 years after I graduated from KU... am TIRED of Cornhusker fans and looking forward to a Big Romp...I enjoyed the victory two years ago...was disappointed by last years collapse...am looking forward to revenge this year!!! ...And I get to watch the game on TV...and the game against OSU. Can it get any better than this?

Oh, and I'll be wearing blue out here in Oregon, just to get in the spirit!

Please go to daveyobrien.com and vote for Reesing for the award. He is currently leading the pack and we need to get him to the finals. Vote! Vote! Vote!

Oops, forgot about the Missouri game. Thanks for setting it straight. -rw

Week seven of "which unbeatens stay unbeaten no more".

Last week I predicted that every unbeaten except KU would lose. I should have said they would all win. Oh well. It's the first week that no unbeaten team has lost. Will this week be the same? I say no.

I think OSU beats Wisconsin. I think ASU loses at Oregon (I'm rooting for the Sun Devils because this is Oregon's hardest game left, and it helps us if both ASU and Oregon lose at least once more -ASU still has to play USC. But ASU's QB is questionable and it's at Oregon.) I think BC loses to Florida State (what a paper tiger, they stink it up for 58 minutes against the only good team they play, and still come out as number 2 in the BCS. It won't last long. Good D though.) I think that Hawaii has a bye (How many bye weeks does Hawaii have !?!?! By the way, they've beaten 8 teams with a combined record of 17-51, and needed two overtime games to do so. They are only ranked in ONE BCS computer poll.)

And, of course, I think KU trounces the sisters of mercy to the north.

Since there are only a few unbeatens, I've added a new section to my weekly predictions: One loss teams that are ahead of KU in the BCS. They are LSU, Oregon, Oklahoma and WVU, and at this point in the season (2/3rds through) they are just as important as the unbeatens.

I think LSU loses at Bama (home field, plus Saban knows that personnel, plus the SEC eats its own.) Oregon (see above) Oklahoma -I think OU wins out until the BIG XII championship. This week: TAMU at home. WVU -Louisville at home. Could be a game, but Louisville can't stop the run or the pass, and that's what WVU does well.

Obviously either ASU or Oregon will lose (maybe both?) and I think LSU and BC will fall, so I have KU ranked next week at number 5. We'll see.

I wonder how much of a problem this poses for the coaching staff. Let's hope that Ganz is not NU's verson of Todd Reesing waiting to get his chance.

Remember who was QBing the Hawks two years ago when we vanguished NU......that's right......a new starting QB. It does make one nervous. Yet, we should cover the spread of 17, as that NU team of two years ago was completely overhyped, and we are for real.

rwood, no problem! However, I think you posted on the wrong article :)

Are we just a bunch of voting freaks or do that many people really respect Reesing around the nation. The vote isnt even close

If the NU game is close I will be worried.

Otherwise, I expect a thorough spanking. I think playing at home will spark the kids and allow the offense to get rolling faster than we've managed on the road.

We don't want any confusion between KU and NU fans, so no red. Wear blue (not white, red, yellow or gray but BLUE) on Saturday.

The weather is looking like it's going to be about 60Â° on Saturday. Should be a perfect day for football. So grab your Blue KU gear and we'll see you on the hill for some 6 am boulevard and breakfast burritos.

It sounds like Ganz is fired up to play us:

Whenever I hear the name Ganz I think of the bad guy in the movie '48 Hours.'

Whenever I hear the name Ganz I think of that guy in Las Vegas on top of every taxi.

KU Coaches: Keep up the GREAT work! Be ready for this quarterback to run a lot more than NU's previous guy. And study how Texas finally beat NU's stellar defense in the fourth quarter -- they ran an odd looking option, reminicent of what Vince Young used to do at UT. KU players: RESPECT NU! They are good (just look at the first 3 quarters against UT). Keep playin' your hearts out! THIS WEEK IS ANOTHER BIG GAME. And regardless of the outcome, shake their hands at the end of the game -- they're great people, just like you. You guys are making us very proud, all over the country, each and every week. KU FANS: EVERYBODY WEAR BLUE AND PACK THE HILL!!!!! ROCK CHALK JAYHAWK!!!

An interesting breakdown of the BCS...

COME ON ALL OF YOU KU FAITHFUL. GO TO www.coachoftheyear.com and vote for Coach Mangino for coach of the year. For godssake Bob Stoops of all people is leading in the balloting. Get there and vote for our MANgino.

Nice post dek. I can't believe his name isn't even on the top 4. Don't worry though, it will be at the end of the year.