A lot has changed since ‘05 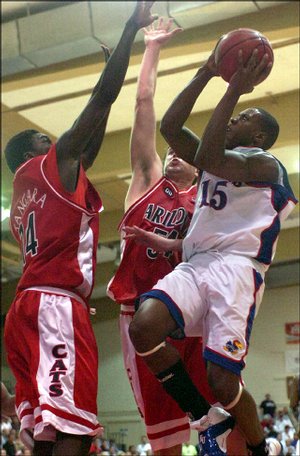 Kansas guard Mario Chalmers hangs in the air and is hounded by Arizona defenders Mohamed Tangara, left, and Kirk Walters in this photo from the last meeting between the Jayhawks and Wildcats, a 61-49 Arizona victory in Maui in 2005.

In large part because of Arizona, Kansas University's last trip to Maui was no day at the beach.

"We played them with our young pups over there. We weren't ready for that to start the season. They got us real good," KU coach Bill Self said, reflecting on the Jayhawks' 61-49 loss to Arizona in a first-round 2005 Maui Invitational contest.

"Hopefully we'll play better this time," Self added of today's 7 p.m. rematch against the Wildcats, who enter unranked and 3-1 compared to No. 4-ranked KU's 4-0 mark.

Chalmers, who has since developed into one of the top shooting guards in the country, somewhat reluctantly recalled his, and his unranked teammates' problems against the Wildcats, who entered that game rated No. 9 nationally.

"That's a long time ago. We don't look back on the past," said Chalmers, who had seven of KU's 27 turnovers against the likes of UA's Hassan Adams, Chris Rodgers, Mustafa Shakur, Isaiah Fox and Ivan Radenovic.

Four current Wildcats, including Kirk Walters (13 points, seven boards) played in the game as well as five current Jayhawks, including Sasha Kaun and Rush who had 12 and 11 points, respectively.

Chalmers had six points and no assists on a day KU registered just 10 assists.

"I think I've grown a lot," Chalmers said. "My freshman year coming in, not knowing a lot, still trying to play high school ball, not knowing the difference to college ... I have learned a lot since then. I don't think I was prepared as much as I am now.

"We were young. Freshmen and sophomores started," he said. "They pushed us out of our comfort zone. They got us good."

Senior forward Darnell Jackson also remembers that Arizona game vividly, even though, "I wasn't there. I was suspended," said Jackson who faced an NCAA penalty for accepting benefits from a KU booster.

"I was sitting in my (dorm) room watching the Arizona game. Now I get a chance to play against them. It's my only time to play Arizona. I need to do what I can to help the team."

The other marquee Wildcat is Jerryd Bayless, a 6-3 freshman from Phoenix who averages 18.3 points and 4.8 boards.

"They've got a lottery pick in Budinger," Self said. "Bayless will be a pro, no question."

"They'll play small and four (smaller players) around one (tall player in Hill)," Self noted. "They spread you and drive you. They are really athletic like they always are. They are good at playing small. They are good defensively. They really react to the ball and cover for each other.

"They are young. Those young guys when they are right ... they are going to be about as good as anybody."

Arizona - which is led by defensive-minded coach Kevin O'Neill in the place of Lute Olson, who is on an indefinite leave of absence - has averaged 79.2 points a game while allowing 67.5.

"I don't know if they've changed much," Self said of the Wildcats under O'Neill instead of Olson. "I know hiring Kevin (as an assistant last offseason) ... the focal point with him was going to be defense. He's obviously had great success in the past defensively in both the NBA and college."

O'Neill last was a head coach in 2003-04 with the Toronto Raptors. At the college level, he's led programs at Marquette, Tennessee and Northwestern. He said this year's KU team was deserving of its ranking.

"They are pretty good. They are a legitimate top-five team obviously," O'Neill said of the Jayhawks. "Bill has done a good job with that program. They are a team that will be good no matter where they play."

I have a hard time being sympathetic toward Olson. Every game I ever saw where he ever got down by more than 15 at Iowa, or UA, he appeared to instruct his players to begin intimidation fouling that risked injuring other team's players. The best I can wish him is that i hope he gets over this sickness about coaching dirty when his teams get behind, at the same time that he gets over whatever other issues he must unfortunately struggle with.