Sure, today's game is big, but other KU-MU meetings had meaning, too 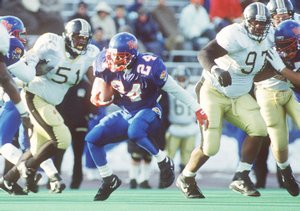 We've heard it all week: Today's game between No. 2 Kansas and No. 3 Missouri is shaping up to be the most important game in the 116-year history of the Border War rivalry.

That certainly is a good guess, even without going back through time. Both the No. 2 Jayhawks (11-0) and No. 3 Tigers (10-1) are in the running for a Big 12 championship and a coveted berth in the BCS National Championship Game.

"There's always been bitter feelings," said Journal-World editor Bill Mayer, who attended his first KU-MU game in the 1940s. "But this comes down to a real, superior, sterling football game."

Mayer adds it up: the stakes, the rankings, the media attention and the 80,000 expected at Arrowhead Stadium. And he considers the 2007 edition the most important.

But through the years, a few of the KU-MU clashes have featured their share of historical signficance - either leading up to the showdown or once the game went to the record books as a true classic.

Here's a quick look at some of the Border War's most memorable editions:

The 2007 Jayhawks, with 11 straight victories, still are chasing the winning streak put together by the 1908 and 1909 Kansas teams which won 18 in a row under coach Bert Kennedy.

Missouri was there to make sure the run went no farther.

The 1909 game was played in Kansas City, Mo., with the Missouri Valley Conference championship at stake. It featured the 8-0 Jayhawks and the 6-0-1 Tigers, a rivalry already in full bloom.

KU assistant Arthur St. Leger Mosse thought the loss was a result of too much confidence among the team. But Kennedy saw it differently, telling the Lawrence Daily World the loss was because "we lack a drop-kicker."

The most controversial game in the Kansas-Missouri rivalry was in 1960 - the root of an argument that resonates to this day.

What's the all-time record in this series?

Leading up to the game, there was speculation that KU halfback Bert Coan was inelgible, stemming from a plane ride he received by KU benefactor Bud Adams while a freshman at TCU.

Adams and the Jayhawks denied any wrongdoing and played Coan in the 1960 Border War, a game between No. 11 Kansas and No. 1 Missouri in Columbia. Coan ended up playing a prominent role in a 23-7 Kansas upset victory.

The Jayhawks won the Big Eight title with the win and could have gone to the Orange Bowl. But a few weeks later, the Big Eight voted 5-3 that Coan was ineligible. KU victories against Colorado and Missouri were forfeited.

Kansas got the last laugh, though. Despite Missouri technically being the only undefeated team in college football (synthetic as it was), it was Minnesota that was named national champion, partly because of Mizzou's humbling on-field loss to Kansas on Nov. 19, 1960.

Before the 1968 Border War between No. 7 Kansas and No. 13 Missouri, bowl invitations already had been accepted by both schools. The Jayhawks were headed to the Orange Bowl, the Tigers to the Gator Bowl.

Still, the Nov. 23, 1968 matchup was for a share of the Big Eight championship with Oklahoma. And Kansas was looking to win its ninth game for the first time in 60 years.

The Jayhawks were thought to have the slight advantage because of quarterback Bobby Douglass, and the pundits were right. Douglass passed for 143 yards and rushed for 43 more in leading Kansas to a 21-19 victory in Columbia.

Mizzou trailed 21-6 in the fourth quarter but stormed back. However, nobody in attendance knew just how much time the Tigers had to rally - a scoreboard malfunction made the clock useless, and only the referee knew the official time.

In the end, it wasn't enough. Mizzou scored with 2:05 left to get within two but never got the ball back. In celebration, Kansas players threw most of the fully-clothed coaching staff into the showers after the game.

The last time - before this week - that Kansas and Missouri played as two ranked teams was on Nov. 24 1973, the regular-season finale in Lawrence betwen the No. 17 Jayhawks and the No. 19 Tigers.

Ironically, the game meant very little at the time. Kansas already had accepted a Liberty Bowl invitation, and Missouri was headed to the Sun Bowl. In addition, neither team was in the running for a Big Eight title.

If anything, the game between 6-3-1 Kansas and 7-3 Missouri came down to Border War bragging rights and a chance for KU quarterback David Jaynes to improve his Heisman Trophy chances.

Missouri led 13-0 after three quarters, the second touchdown a brilliant 53-yard punt return by John Moseley. But Jaynes and the Jayhawks battled back, getting two touchdown passes in the final 14 minutes to win, 14-13. The winning score with 1:37 left was a pass to Emmett Edwards, who was a step ahead of Moseley when Jaynes hit him.

Jaynes ended up fourth in the Heisman voting. Moseley, as it turns out, barely escaped death later that night when his house caught on fire and he was forced to jump from a second-story ledge.

The Jayhawks entered the 1991 game looking to complete their first winning season in 10 years. Missouri, at 3-6, was trying to snap a four-game losing streak and find something to smile about heading into the offseason.

But the day wasn't for the Tigers; it instead belonged to pip-squeak KU running back Tony Sands, who announced to his team the night before that he was ready to dominate. Sands carried the ball 58 times (still an NCAA record) for 396 yards and four touchdowns in a 53-29 Kansas victory on a teeth-chattering November day in Lawrence.

Sands had 156 yards at halftime and 297 yards after three quarters. The Jayhawks then set their sights on Sands getting the NCAA mark. With the record finally in hand and 20 seconds left, Sands was carried off the field and into KU football lore.

"It was large, man," KU offensive lineman Keith Loneker said later. "It was just so much fun."

The 2003 football season got under way with a curiosity across campus whether Kansas ever would beat a big-name opponent again.

It had been too long - perhaps a 2001 victory at Texas Tech - since KU hung with the big dogs. A 28-20 loss to Northwestern to start the '03 season only caused the realization that there still was a long way to go.

Kansas rebounded, though, beating UNLV, Jacksonville State and Wyoming to move to 3-1. That brought up the biggest test yet for quarterback Bill Whittemore and his crew - a Sept. 27 battle with No. 24 Missouri at Memorial Stadium.

With a sold-out crowd looking on, Missouri took a 14-13 lead into the beginning of the fourth quarter when the onslaught started. The Jayhawks ran all over the Tigers in the fourth, scoring 22 unanswered points and injecting the community with a jolt of excitement in a 35-14 victory. The goal posts were torn down and thrown in Potter Lake, a celebration athletic director Lew Perkins said "was wonderful."

Touchdowns by Whittemore, Clark Green and John Randle sealed the victory that was, as one columnist put it, "The day Kansas climbed over the Big 12 Conference mountain and became a real player in football for the first time in a long time."

The Jayhawks haven't looked back since.