Liza Avdeeva talks about the holidays

Liza Avdeeva, from Russia, describes the dish she made and spending holidays in the U.S. and her home country. 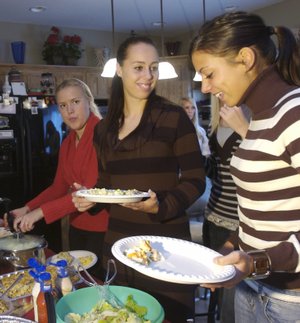 A traditional Russian salad and a Hungarian chocolate dessert added to the international flair of one Lawrence home during Thanksgiving.

Amy Hall-Holt, head coach of Kansas University's women's tennis team, invited her international players to join her and her family to experience the American holiday feast. However, she also requested they bring a dish from their native country.

"This team has been a huge, huge part of my life, and these girls are wonderful, so I wanted to do something special for them," she said. "They've given me so much, so I wanted to give something back to them."

Her team of 10 has players from three other countries, and her coaching assistant, German Dalmagro, is from Argentina.

"It's a neat thing bringing cultures from all over together with a common goal," Dalmagro said.

That goal is to win matches and to learn about one another, he said.

What have some of the players learned about Americans and their traditions?

"American people like to eat," said Edina Horvath, a junior from Budapest, Hungary.

"I felt so good when making the pie, I remembered my hometown," she said.

She said she's excited to return home in three weeks for Christmas.

Her roommate, Kunigunda Dorn, a sophomore from Sopron, Hungary, who said she doesn't cook but helped taste-test the desserts, will be in Lawrence.

"I was so sad I have to stay here," Dorn said. "Coach Hall-Holt was nice to invite me, though. She's our second mom."

The family setting with "lots of food and a warm atmosphere" impressed Liza Avdeeva, a senior from Obninsk, Russia.