Anatomy of a rivalry 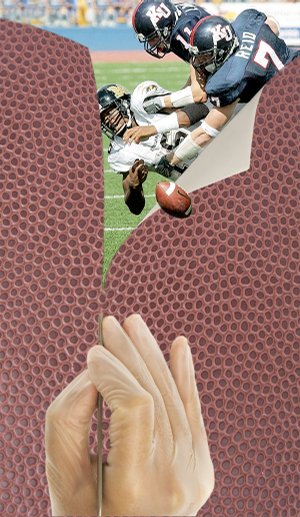 How important is it for KU to win the football game against Missouri?

Personnel-wise, who do you think creates the the biggest matchup problem for KU's defense?

That word printed below a picture of Lawrence burning on a Missouri-yellow T-shirt was enough to ignite the Jayhawk faithful.

Soon, drawings of John Brown superimposed over the state of Kansas popped up on the Internet. Kansas fans were making their own statement about a rivalry that dates back more than 150 years.

Yes, the rivalry between Oregon and Oregon State actually is known as the Civil War. But Saturday night's Armageddon at Arrowhead - alternately known as the Border War or the Border Showdown - is rooted in the actual, shooting Civil War.

"The violence between Kansas and Missouri in history started with the passage of the Kansas-Nebraska Act in 1854," said Virgil Dean, who works for the Kansas Historical Society. "Missourians had a real interest in making sure Kansas was a slave state - in promoting the expansion of slavery."

That didn't sit well with Kansans, including the aforementioned Brown. So Kansans and Missourians fought.

"In the mid-19th century, there wasn't anything more controversial than slavery," Dean said.

For years, from 1854 until the end of the Civil War in 1865, the two sides committed atrocities of varying degrees. Neither side was perfect, though in the end, Kansas could say it was fighting against slavery and Missouri, well, wasn't.

Sure, you might say, the Civil War ended 140 years ago. No one involved in modern-day sports really thinks about the history behind this rivalry.

Ask former KU football coach Don Fambrough about that. In his annual - suitable for adults only - pregame speech to the Jayhawks, he tells the story of William Quantrill and how the raider sacked Lawrence. He talks about how Quantrill, Jesse James and other Missouri "bushwhackers" were fighting for slavery.

And, he reminds KU players, Quantrill was an MU grad. Historically accurate? Nope. Motivational? You better believe it.

And that's not all.

All of last season, the KU football players wore red socks during just one game: against Missouri. Through the years, KU has often chosen to wear red socks for only the MU game.

"Several groups of (Civil War) Kansans had red leggings they wore," Dean said. "The red-leggers were a group of Kansas cavalry that were particularly hostile."

MU fans will tell you that those leggings didn't turn red until they were soaked in the blood of Missourians killed in cross-border raids. And keep in mind, Kansas and Missouri were technically on the same side - the Union - during the Civil War. Technically.

Shortly after the Civil War ended, a state of detente broke out between Jayhawkers and Bushwhackers. Dean said commerce was a stabilizing factor. Towns in Missouri wanted the food produced in Kansas. Kansas farmers wanted a place to sell their goods.

The deadly raids of the war are over, but there are Missourians and Kansans stationed behind enemy lines on each others' college campuses.

Joshua Bickel is a 2006 graduate of KU who is attending graduate school at MU.

"It's hard. It's really, really hard," he said. "I'm from Kansas, and I really love my school and my state and where I come from. To have people tell it's a crappy place when they've never been there? That's really hard."

Bickel said his MU friends give him trouble all the time for his allegiance to the Jayhawks and the Sunflower State. Especially during the last week, as hype for the Border Showdown has grown to immense proportions.

Lauren Baranowski knows how Bickel feels. She's an MU graduate - "definitely a Tiger fan forever" - who's been forced to attend school at KU.

"Missouri doesn't have a grad program in audiology, and KU has a really good one," she explained. "Every time I see the bill, I'm reminded of my pain."

And Baranowski even has problems going home to her alma mater. Because of the KU Medical Center sticker on her car, some sharp-eyed Missouri fan recently wrote a message on her car: "Keep Jayhawkers out of Columbia."

Ouch. Rejected by her own.

Through the years, marching band members from both KU and MU have reported attacks by opposing fans, leading to bands often not traveling to away games.

Former MU basketball coach Norm Stewart was legendary for refusing to stay in Kansas hotels or buy Kansas gas. He'd have his team stay in Kansas City, Mo., before playing either K-State or KU.

Fambrough's the same way. He refuses to spend a dime in Missouri if he can do so in Kansas.