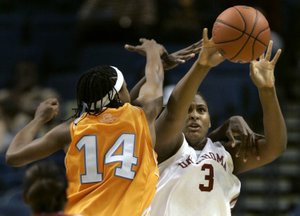 Oklahoma's Courtney Paris (3) dishes a pass while being covered by Tennessee's Alex Hornbuckle.

Bobbitt secured the victory with two free throws to put Tennessee up 70-67 with 3.2 seconds to play after the Lady Vols forced a jump ball on Oklahoma's previous possession.

After Oklahoma went ahead 67-66 on Courtney Paris' basket with a half-minute left, Tennessee (2-0) took the lead for good on two free throws by Alexis Hornbuckle with 26.7 seconds to go.

Prairie View had a 17-10 lead with 15:24 left in the first half before Micheaux scored five unanswered points, and Starks and Gant hit jump shots to tie the game at 19.

Danielle Wilson led Baylor with 21 points on 9-of-13 shooting, with seven rebounds, and had 14 of her points by halftime. Jessika Bradley had 10 points for the Lady Bears, who shot 57 percent (30-of-53) from the field.

Austin, Texas - Freshman Kathleen Nash scored 19 points and grabbed 10 rebounds to lead Texas, which led by 36 at the half.

Texas was dominant in the low post, scoring 54 points in the paint.

Erneisha Bailey, Aubry Cook and Rachel Rentschler each scored 13 points for the Longhorns.