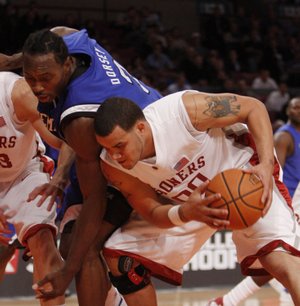 New York — Joey Dorsey returned to the Memphis lineup with the kind of performance the third-ranked Tigers will need from him every game if they are going to be a contender for the national championship.

Dorsey, who missed the first two games of the season because of a shoulder injury, finished with nine points, 12 rebounds and five blocks in the Tigers' 63-53 victory over Oklahoma on Thursday night in the semifinals of the 2K Sports College Hoop Classic.

"I was just happy to be out on the floor. I was so amped up for this game. I couldn't wait to start playing," Dorsey said. "I'll try to get rest and get ready for a physical game, football game tomorrow."

Memphis will face Connecticut, which beat Gardner-Webb, 78-66, tonight at Madison Square Garden in the championship game of the tournament that benefits Coaches vs. Cancer.

Dorsey banged the shoulder during the game and had a big ice pack on it afterward.

"I hurt it, I hurt it bad, so I'm going to get some treatment tonight" he said. "It's real tight and I can't lift my arm."

"He's a huge player, changed the game," Rose said of Dorsey. "I know you all saw him out there grabbing rebounds, blocking shots, catching 'oops. That's what he's supposed to do."

"Oklahoma played so well, physical," Memphis coach John Calipari said. "We had chances to spread it out and get that lead to where it's ballgame, and they never really let us get to that."

After trailing 35-25 at halftime, the Sooners got within 45-40 on a fast-break dunk by Austin Johnson with 12 minutes to play.

Memphis then went on a 10-3 run, of which Rose had the final seven points, the last two on free throws after a technical foul was called against Oklahoma coach Jeff Capel. It was Memphis' first 12-point lead of the game, and the Tigers would match it two more times.

The sophomore guard was 8-of-11 from the floor and scored 18 points in the first half as the Buffaloes opened up a huge lead early and never were seriously threatened.

The Rattlers, the defending Mid-Eastern Atlantic Conference tournament champions, could get no closer than eight points the rest of the way.

Jermyl Jackson-Wilson scored 11 points, and Cory Higgins, Richard Roby and Levi Knutson each added 10 for the Buffaloes, who were picked by the Big 12 coaches to finish in last place in the league.