KU football team off to best start since 1899 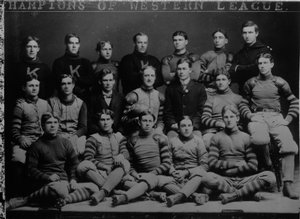 Thirteen KU seniors will say goodbye to Memorial State when they take on Iowa State in the last Jayhawk home game of the year.

Aqib Talib is a finalist for the Bronco Nagurski Trophy, given to the best defensive college player of the year.

America was at war. The Eldridge Hotel had just been remodeled. Voters approved a new school and a new courthouse. And Kansas University's football team was 10-0.

The last time that Kansas University's football team went undefeated for so long, a "good meal" at a downtown restaurant cost 15 cents, a teenage trend of "progressive buggy rides" was emerging and Lawrence streets were being paved for the first time with brick.

It was just before the dawn of the 20th century. William McKinley was president. KU students had gone off to fight the Spanish-American War.

The Lawrence Daily World newspaper proclaimed the year "a golden one in the history of the city."

So many Lawrencians were using the telephone that the Missouri and Kansas Telephone Company had to substantially expand its workforce - from one operator to three during the day and two at night. The company hoped to build its customer base up to 500.

The Eldridge Hotel had just undergone major renovations, so much so The Lawrence Daily World declared it the "best hotel in the state." Rates were $2.50 per day.

Local businesses sold wood and coal for fuel. Carriages, buggies and road wagons were sold on Massachusetts Street. There were dry good stores, liveries and millenaries. The downtown had hitching posts and boardwalks.

Men wore three-piece suits and bowler hats, even when they were cheerleading. Women still squeezed into corsets.

Lawrence's population was about 10,000. The city was the business center of the local agricultural community.

"Farmers came in on the weekends to do trade. Mass Street was bustling from people coming in from the country," local historian Karl Gridley said.

Kansas University had 1,150 students enrolled that year. Bailey Hall was referred to as the "new chemistry building." The marching band with 27 members was a year old.

The top of Mount Oread had a handful of buildings, few trees and muddy roads.

"It was a rugged landscape," Gridley said.

The football team - which on Saturday will play Iowa State in Memorial Stadium - was less than a decade old. The team played on McCook Field (roughly where Memorial Stadium is today). When built, its grandstands could hold about 1,000, Gridley said.

Pictures show horse and buggies pulled up to the scrimmage lines.

Although young, the KU and Missouri University football rivalry was well under way. According to the 1900 yearbook, the Jawhawks' "invasion of Missouri" ended with the "Tigers outclassed and outgeneraled at every point."

Many in the crowd would have been old enough to remember the real border wars.

"This wasn't ancient history for them. The Civil War was just four decades before. It was kind of the way the Vietnam War was to us," Gridley said.

I think Rivals had KU's '99 recruiting class ranked #4 in the country with ten 3-buggy and seven 4-buggy recruits.

Little bit of a lawrence history lesson more than a sports article, but I like it

KU FANS: Let's show up and cover the Hill with BLUE!!!! If you are a KU player: Iowa State is for real -- RESPECT the CYCLONES!!! Win or Lose, play your hearts out and shake their hands -- they are great hardworking guys, just like you. Across the nation, we are so proud of you guys! ROCK CHALK JAYHAWK!!!

Does anyone know where I can get a highlight DVD of the 1899 season? :)

Wow, I love the pictures. If I'm not mistaken, the one with the flag flying is indeed old Frasier hall. The one to the right of it is the current Bailey Hall, not finished until 1900. To the left a ways of Frasier is Spooner Hall, which still stands today, it's the anthropology building that has that sculture that kind of looks like a bishop from a chess set in front of it.

Crazy to see those buildings in their original environment, it was definitely a rugged looking campus at the time.

Love the gallery of old pictures to the left of the article. I especially like the one of the football game with the campus in the background--looks like one building, but it has towers with a flag flying!

Wow they had some handsome cheerleaders back then! We have come a long way.

I had to re-check the byline to see if Bill Mayer was writing a first-hand account.

36-6, I bet KU's head coach was accused of running up the score.

If that is old Fraser Hall in the background then McCook Field must of been situated in what is now the Kansas Union parking lot.

didn't touchdowns only count for four points back then?

Doesn't it seem like Journal World writers have some good ideas, write about them for the appropriate amount of words and then simply stop? What about conclusions, summing up your points, finishing the article? Keegan does this more than anyone, but it seemed to be present here too. Oh well, GO Hawks

When will we know what time the MU/KU is?

hey duck! txrockchalk mentioned this thread ... sorry I missed it, wasn't ignoring you!