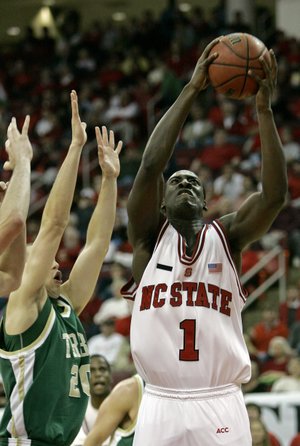 The freshman scored 31 points on 12-for-12 shooting Thursday night, and No. 21 N.C. State beat William & Mary, 66-47, for the program's 14th straight season-opening victory and second in two tries under coach Sidney Lowe.

Brandon Costner added 13 points and 12 rebounds for the Wolfpack, who played tough defense the entire way to get off to a successful start in a year filled with high expectations. Still, it was Hickson's big day that had his teammates almost giddy with excitement.

"I've been telling y'all he was a beast in all these interviews," senior Gavin Grant said of the 6-foot-9 former McDonald's All-American. "But nobody would listen to me. I can't wait to see him play against a bigger and stronger opponent, but I'm pretty sure he's going to have his way with pretty much anybody he faces this year."

With typically tough defense and a balanced offense paced by 12 points apiece from Roy Hibbert and Jessie Sapp, the No. 5 Hoyas raced out to a big lead and never were challenged.

All of the first-half numbers were rather out of the ordinary, including this unofficial stat: Michigan put up five airballs in the opening 20 minutes while falling behind 43-19.

San Juan, Puerto Rico - Patrick Beverley had 16 points and seven rebounds to help the Razorbacks get the victory in the Puerto Rico Tip-Off.

Darian Townes added 11 points for the Razorbacks, who outrebounded the Cougars 53-27. Sonny Weems finished with 10 points.

Dustin Scott scored 12 points for College of Charleston, which shot 28.6 percent from the field.

The Razorbacks got off to a fast start, opening the game with a 16-2 run.

Pittsburgh - Sam Young gave Mississippi Valley State plenty of problems at both ends of the floor, scoring 17 points and starting numerous fast breaks with his 12 rebounds.

Pitt closed out the Hispanic College Fund Challenge portion of its schedule with its fourth consecutive home-court victory, all by margins of at least 11 points.