The Kansas Jayhawk men's basketball team defeated the UMKC Kangaroos by a final score of 85-62. 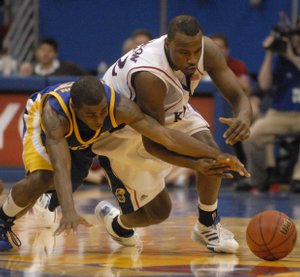 Points by which KU outscored UMKC from free-throws

Steals by the Jayhawks, contributing to 26 points off turnovers

Field goals by the Jayhawks

Assists by the Jayhawks

A pure shooter with a mentality to match, Mario Chalmers shook his head 'No' when asked if Kansas University's basketball players launched too many 3-pointers Sunday night at Allen Fieldhouse.

"I don't think so. We shot 22 3s. That might be our new game plan," the 6-foot-1 junior marksman said, grinning, after the Jayhawks' 85-62 victory over pesky University of Missouri-Kansas City.

"I think it was (the game plan) this game, just because they were sagging off us so much. Anytime you are open, you've got to take it."

Chalmers iced a career-high six 3-pointers (he had five against Texas last year) in nine tries and tied a career high with 23 points.

Sherron Collins, who had 10 points, missed six threes without a make, while Tyrel Reed missed the only other trey try against UMKC's 1-3-1 zone.

"Anytime a team doubles our big guys, or sags back, it will leave the guards open. If the shot is open, we'll take it," Chalmers said.

KU coach Bill Self applauded Chalmers' long-range shooting, informing reporters - without the benefit of a stat sheet - the Anchorage native is 14-for-22 in four games, counting two exhibitions. He's seven for 13 from beyond the arc in two regular-season contests.

"Mario shot the lights out. Obviously, he's off to a good start," Self said. "We needed him tonight. Russell (who had career-high-tying nine assists) is shooting it better, too. Sherron didn't shoot it in, so it was just a role reversal from the last game."

In Friday's opening-night rout of Louisiana-Monroe, Chalmers made one of four three and had eight points, while Collins hit four of seven and tallied 22. Robinson made two of four and had 10 against the Warhawks.

"We didn't attack their zone very well tonight, so it was good to have guys step up and make shots," said Self, who used just three big men, figuring smaller, quicker UMKC provided a bad matchup for rookie Cole Aldrich.

"UMKC did a good job," Self said of the Kangaroos, fired up playing their opener under new coach Matt Brown, whose Princeton offense and sagging defense had the 'Roos within 10 points - 62-52 - with 8:41 left.

"We scored 80 points in a limited-possession game," Self added, noting his squad did something right.

"I'd say 30 percent of our shots should be 3s. Last year we averaged 18 (3s) a game and were about 28 percent. When a team plays zone like that, you'll shoot a higher percentage of 3s."

Rodrick Stewart followed that with a hoop, and KU was safely in front once again.

"I feel confident," Chalmers aid. "I did a lot of work in the offseason, getting my jumper right. I had more repetitions, sometimes shot 500 or 250 or would make a quick 50 3s before practice. I do it during the season, too."

One thing he didn't do well Sunday was dunk. Chalmers missed a one-handed slam on a breakaway and also another dunk try on a night Arthur also missed two dunks (but was fouled on one attempt).

"I was a little bit too excited for that one," Chalmers said. "We've got a lot to improve on, especially on defense. We have to have the mind-set we make it hard on them to score."

KU will take a 2-0 record into Thursday's 7 p.m. home battle against Washburn in KU's second game of the round-robin Jayhawk Invitational.

"It was a good win tonight," the coach assessed. "It was good for us to sweat and play under some duress. We did poorly executing, blocking out and free-throw shooting (16 of 31), still we win by 23. We have to get better."

"The Jayhawks, who return most of the key players from the team that won last year's Big 12 title and advanced to the round of 16 in the NCAA tournament, have been less than impressive in both their games despite easy victories over undermanned opponents."

He's right we did advance to the round of 16, also to the round of 8. But I don't know why they're saying we "struggled for the second time in a row." I guess we're just expected to win by at least 40.

Can someone please tell me, did the Mid-Continent Conference change its name to the Summit, or did UMKC change leagues?

The Mid-Con did change their name to the Summit League.

The free-throw shooting is my only big concern with this team so far. Their defensive struggles should be alleviated once BRush gets back.

UMKC was successful in the 2nd half of muddying up the game...KU better expect that a lot this season...small teams will have to take the chance that KU won't win it from the outside.

In that AP article, the writer Doug Tucker should know better. He's covered the hawks for quite some time now.

As for the game, will we ever hit free throws?

Asking Self and his players not to play take-what-they-give-us, is like asking Roy and Wooden not to try to dictate the pace.

KU does not play an opponent. They play the match-up advantages that an opponent gives them.

I am convinced that when KU is standing around on offense, it is because that is what the opponent is giving them. Put another way, if an opponent denies the inside passing lanes and takes away the cuts, KU will stand around all night and play perimeter catch until they find the guy on KU with the best match-up and let him go one-on-one.

Alternatively, if a team packs it in and takes away the cuts, they'll shoot 3's all night.

And if the opponent defends the stripe, they'll go inside all night.

And if the opponent says to-may-toe, KU will say to-mah-toe, and vice versa.

I'd like to hear how Tucker would classify KSU's come-from-behind win against lowly Pitt State. A two-man team can win a lot of games, but it will always stumble (see USC).

we're playing too many $h!tty teams. why are we playing washburn for example?! we've already done our exhibition slate. does it even count as a win?

2 Issues: 1- Quit taking what the other team gives you (if you are in a position to do anything about it... and against a small team like UMKC, they are more than qualified to dictate the style of play). 2- FREE THROWS! Is this still a mystery? Why is this so hard to address?

In high school I probably shot 90% from the free throw line in practice, and 70% in games. My coach demanded that I make 50 free throws after every practice and if I missed two in a row I had to run a stair lap or a suicide. I hardly ever missed two in a row. One day though he told me to make 10 but I had to run after every miss. I shouldn't have missed any but that night I never made it to 10. There is a very odd mental edge to free throws. It's why no matter how much Shaq ever practiced he never really got better at them. I don't know what to say but they just gotta keep shooting extra free throws every day and just make it a routine and eventually they will start making them in games and get that confidence that the free throw is always gonna go down.

This could be an interesting season, our defense is shady, our big men are shady, never thought I'd miss Brandon and Julian that badly.. I hope we're not going to play down to our competition all year, or waiting for Brandon to come back before we start balling.. Its great to be a spoiled KU fan... Rockem Hawks!!1

Jaybate, wouldn't you say that in one key area (tempo), Self is noticeably calling for the guards to run the pace faster, thus making KU actually try to dictate the pace, and when the other team 'reacts' to the initial ball delivery, like us passing it inside and collapsing their defense, we then kick it out for the open 3....I would postulate that WE are actually setting the tempo with our fast, fast tempo attack? And then proceeding to kill 'em with whatever they leave open--kind of merciless actually, and I feel somewhat smug-ly arrogant, feeling that we have a team that can 'beat ya however you want it', basically an amped-for-40min version of 'pick your poison'. I love it.

I've waited awhile to respond, because you made me think, which is all to the good. Here is what has finally perked out.

Self does seem to have picked up the pace they play at the start, so we agree to that point.

But I think Self has to pick some tempo to start the game, as a practical means of giving his players a starting point. If he sends them out with no tempo, then what do they do if they get the ball first. Further, I think he picks that initial tempo based on what he thinks his team's strength is and on what he thinks will generate a quick mismatch with a given opponent. Starting three short, fast guards, it stands to reason that the quickest way to a mismatch is to hurry up and down the floor against a slower team.

But after that initial minute or two, I think KU always reacts to what an opponent is giving them and play unfolds according to what is being given KU by its opponent.

Could be wrong, but that's how I see it.