Kansas University's Darnell Jackson drives home a hard slam over Louisiana-Monroe's Raphelle Turner in the first half. Jackson finished with 21 points in the Jayhawks' season-opening 107-78 rout Friday in Allen Fieldhouse.

The Jayhawks swept the Lousiana-Monroe Warhawks tonight at Allen Fieldhouse, 107-78.

A year ago, the Kansas basketball team opened the season by ripping Northern Arizona and then falling to Oral Roberts. Tonight the '07-'08 season begins against Louisiana Monroe.

Kevin and DJ face off in a game of useless fieldhouse trivia. 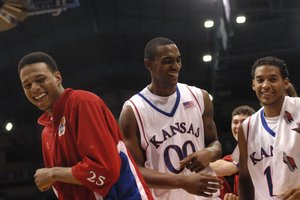 Darnell Jackson wears thick pads on both thighs underneath his shorts at Kansas University basketball practices and games.

The protective equipment didn't weigh him down any Friday night at Allen Fieldhouse.

Jackson resembled Michael Jordan in taking off past the free-throw line and skying for a vicious dunk - easily the most memorable basket - in the No. 4-ranked Jayhawks' 107-78 rout of Louisiana-Monroe.

Jackson came off the bench to cash a career-best eight baskets in nine attempts and score a career-high 21 points with four rebounds and four steals in 18 minutes.

"I shocked myself. I thought I was going to miss it," Jackson said of the Jordanesque slam. "Mario (Chalmers, who had assist on the play) told me he was going to set me up, and he did. He was counting my steps. He knows the way I set my feet."

Jackson was one of five KU players to score in double figures - Sherron Collins was one off a career high with 22 points despite being rested the final nine minutes - on a night the Jayhawks topped the century mark in an opener for the first time since a 122-point outing against Maryland-Baltimore County back in 1991. It tied for the most points by the Jayhawks in Bill Self's five years as coach. KU hit for 107 against Niagara in March of 2007.

"I thought Darnell was terrific," Self said. "He will be the first to tell you he had a couple of breakdowns defensively, but I thought he was really good."

Indeed, Jackson bemoaned the fact the Jayhawks allowed an opponent to shoot 50 percent or better for just the third time in the last 75 games and second straight game (to go with UCLA game in NCAA Tournament). ULM made 26 of 51 shots for 51 percent.

"We all need to buckle down on defense," Jackson said.

Don't get the idea Jackson will be clamoring for a starting spot in the lineup, however.

"If I was 10th man, I'd be fine with that," the Oklahoma City native said. "If I played one minute with two rebounds and we won, I'd be happy. I'm just glad coach Self has confidence in me enough to put me in the game."

Jackson insists individual stats do not matter. His 21 points shattered his old point high of 13, which he had reached five times, most recently against Kansas State on Feb. 7.

"Twenty one points makes me feel no different than if I had zero points and 10 rebounds," he said. "Twenty-one points is 21 points. I have a long way to go - blocking out, post moves, footwork."

The Jayhawks won't have much time to enjoy this victory, which was made possible by sizzling 55.6 percent shooting, including 12 of 24 threes. They will meet UMKC at 7 p.m. Sunday at Allen Fieldhouse.

KU again will try to avoid the fate of some major programs early this season. Kentucky lost to Gardner-Webb, while Ohio State lost to Findlay and Michigan State to Grand Valley State in the exhibition season.

"It's been on everybody's mind, coaching staff, players. We've seen other teams fall to Div. II schools. We've seen it (watching TV) in our rooms and locker room on 'SportsCenter.' All those teams losing ... we didn't want to be one of those teams getting upset," Jackson said.

Not on Opening Night, thanks in large part to sixth-man deluxe Jackson.

That's it, Darnell is hands down my favorite KU player. He's deserved a spot in the starting lineup since the middle of last year.

I was equally impressed with Mario after reading this quote from Darnell: "Mario (Chalmers, who had assist on the play) told me he was going to set me up, and he did. He was counting my steps. He knows the way I set my feet." That seems amazing to me.

Yea that can't be easy...in the middle of a play counting steps for a teammate. I guess that comes with playing a lot of basketball.

Nice to see the guys shooting a better percentage on their free throws.

Not to take anything away from Darnell and his outstanding game, but he did NOT take off from behind the free throw line.

Wow! Darnell has the best attitude I've seen in a ballplayer in a long time. What a great kid!

Completely agree DCJayhawk... I called into the locker room show the middle of last season and asked when DJ would finally get the starting nod over Sasha... he's just a better player.

Darnell is maturing. His high level of energy may be too much in the beginning of a game. But when the opponent team has lost some of its defense intensity, that's where Darnell can wreak havoc. In many ways, it's good to keep him ready for that second wave of energy we need.

Kerbyd - good notice on the FT's, and great to see DJ perfect from the line. My first thought in the article was that it was nice to see the 3 pt % up there. 100 pts and blowing out a small school are rather irrelevant in my opinion, but it is great to see them executing more than overpowering smaller players with dunks. That doesn't do much of any good once the comp gets better.

It is good to see the same maturity in DJ as in SC last year (this year when BR returns?). It is great to see that they realize that starting is not nearly as important as PT and team success. Their energy off the bench is fantastic!

NICE to have 10 (TEN!) starter-caliber players. I am not one to criticize Sasha, by the way--I just expect him to hold his own--if he is ready to show us more, so be it! If he and coach think he can and he's trying and its just early in the season, then thats fine. He went 66% from the field on 4 of 6 shooting, and Cole Aldrich went 66% from the field on 2 or 3 shooting. That's pretty good, guys--they arent hurting us, and someone had to let DJackson and Sherron take their shots--feed the hot hand, right? About Shady, I look at it that way too: there are only so many shot possessions, and so many minutes in a game--what if you just played 4 scrubs + 1 Shady all the way to the final buzzer and keep feeding him--sure, he would also have 16-20 points! There are limitations on just how many people can score in double figures, and how many of those will surpass 20pts... I also see Russell is not shy about the 3pt shot-imagine if he keeps this up, what he started in March Madness--1 or 2 more shots for him and HE gets double figs every night! Oh, and we havent even seen Mr. Rush--our defense will improve with him also. Julian Wright's departure, plus the gods of serendipity, plus alot of hard work and consistent execution, could all conspire to make this year very, very special.

Great win but I expected our defense to be a lot better with all the expierence on the team. They were smaller and quicker then our guys and we won't see a team like that in the Big 12 other then Misery, so we should be OK. We better watch out for the second coming of Durant when Kstate comes to town. Rockem Hawks and keep sawing wood..