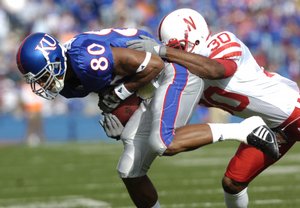 KU freshman wide receiver Dezmon Briscoe, left, latches on to a pass Satuday, Nov. 3, 2007 as Nebraska's Tierre Green closes in on the tackle.

Dezmon Briscoe, a Kansas University freshman football player and one of the Jayhawks' leading receivers, will appear in court at the end of the month on charges of theft by deception, less than $1,000.

According to court filings last week, Briscoe, of Dallas, tried to steal merchandise from Wal-Mart. The district attorney's office, citing the case's juvenile status, had no comment.

Briscoe is being charged as a juvenile because the theft is alleged to have occurred in June before Briscoe - who was in Lawrence preparing for the football season - turned 18. Many KU athletes come to Lawrence over the summer to take part in the athletic department's summer bridge program, which helps athletes adjust to the college academic and athletic environment.

Neither Briscoe nor the athletic department had any comment Wednesday afternoon, except to say the department has been aware of the alleged incident since June.

Briscoe has scored seven touchdowns and has racked up 322 yards on 26 receptions in nine games this season. His seven TD catches are a team-high, and three of those came in last Saturday's 76-39 win over Nebraska at Memorial Stadium.

In addition to Briscoe, his mother Shannon Greene has been ordered to appear in Douglas County District Court at 4 p.m. Nov. 29. That would be after that last game of KU's regular season, but before a possible Big 12 Championship game or bowl appearance.

I shoplifted at 17 and I was a middle class white kid from a good family. I don't even know why I did it (and never did it again). Mangino has booted better guys than him from the team. He can handle it. Believe me.

Here is another story to take your mind of the latest distraction...

Ouch. At least he was a minor. Going to be better off. But still...

phooey ... I knew things were going to well!!

maybe this explains why he runs so fast?

it'll definitely make national news at this point. But in the words of the Offspring

Give him a break. He comes from the worst area in Dallas!

Check out the 'Husker logo on the "Bottom 10" http://sports.espn.go.com/ncf/news/story?page=bottom100710

this seems to be a trend amongst the better athletes - thinking they are untouchable and above the law. the disturbing thing is that the AD seems to have been awae of it ALL SEASON!!!! what the hell is this guy doing playing football??? sounds like a bad gamble to me. I've loved calling Mizzou cheaters because of this crap. guess we aren't any better now.

He's not in the "worst area in Dallas anymore" Fla, he's in Lawrence now, time to step it up! Stop making excuses for him.

We have come too far to piss this away!

Wal-Mart?... Fricken Wal-Mart?.. Why Wal-Mart? I could of, and would of bought him ten of whatever he was gonna steal at Wal-Mart.. I don't make a lot of money but come on, Wal-Mart?.. If your gonna steal something go to Best Buy or The Buckle, shoot he could smooth talk the women at tht Buckle into buying it for him.. KU boosters must suck at their job if a kids gotta steal from Wal-Mart....

live4h2o, thanks for the pick-me-up. I needed it after reading this article.

Well, hopefully he learned his lesson. I've been around long enough to see a lot of athletes throughout the years do a lot of shady stuff. I don't think anyone has gone through life without doing something stupid at least once.

Screw up once...learn from your mistake...face the music...move on. I will not judge a previously 17 year old kid for a lapse of judgement.

Good luck to Dezmon in the future if he doesn't remain on the team.

This is the LAST thing the team needs right now! Unbelievable.

live4h2o - thanks for the link. Priceless!

You think we've got problems now?!! Just try buying him even ONE of ANYTHING and see what kind of trouble not only Briscoe, but all of us are in!!

it was bad judgment but there is no way you kick any kid off the team for a minor theft charge. especially when you compare a wal-mart theft to what many players across the college spectrum are charged with (see OSU's linebacker missing saturday's game for sexual assault charges).

Sounds like he is using a page out of J.R. Giddens' old playbook, huh?

Lawrence Phillips routinely beat up his girlfriend and suited up on Saturday. This is not the type of publicity we want but it could be a lot worse. Briscoe is a good looking receiver, let's hope this is a one time occurrence.

Sounds to me like it must be classed as a misdemeanor. Is "theft by deception" a fancy way of saying shoplifting? If the AD has known about it since June I expect a plan of some kind has been worked out or they wouldn't have let him play. Makes you sick to see kids screw up their futures. Hope he's learned his lesson.

haha KU, I thought the same thing! Let's just hope he avoids knife fights in the future. What are they calling the Moon Bar these days?

But seriously, he's a young kid and he made a mistake. I probably did some things that were worse than this when I was a year or two older than he is, and things have turned out alright for me. My perceptions of Dezmon will not change at all unless he continues to screw up. If he can put this incident behind him and learn from it I think he will be much better off as a person than had it never happened.

Let's see some more facts; right now there aren't many.

"what the hell is this guy doing playing football???"

So let me get this straight: you're saying that if a 17-year-old kid does a stupid thing and commits a minor theft, that kid should never be allowed another chance, he should be banned from having an opportunity to improve himself? Is that what you're saying?

It is unfortunate that this came out now (and I'm suspicious of where it came from), but it's a blip on the radar screen, nothing more.

Wait...this happened way back in June??? And we're just now hearing about it??? I hope Mangino REALLY punished his ass for this!!!! We don't need this crap at KU!!!!

Look people, we've hardly gotten any media attention as it is with our undefeated season, so I doubt this will even pop up anywhere except here.

I don't see why everybody is so surprised about just now hearing about this... has anybody noticed that OSU will be missing one of their linebackers because he is going to the trial for a crime he commited over 3 years ago at his high school prom (he is now a SENIOR on their team!)... the justice system takes a while, and honestly, what good would it have done to have known about this before? the athletic department obviously isn't worried about it, so I don't think we should be either. Kids make mistakes, and as long as they don't CONTINUE to make the SAME mistakes (John Randle anyone?) then we shouldn't come down too hard on them. and honestly. who hasn't stolen from wal-mart...

djkc28-It pisses me off too but leave the gd word out next time.

A 17-year old kid made a mistake... I predict everyone will admire how Coach Mangino and the program handle the situation, helping Dezmon and giving him the support he needs, while still having him be responsible for his actions. In the end, our program will shine for how it helps develop it's kids to grow in more ways than just as a football player.

Make him hang out with McClinton, Gary Greene, Dexton Fields, and Chris Harris for a while.

I'm not a Christian myself, but these seem like some really good kids that could help a young man to not fall into more trouble.

It is frustrating that every time KU gets a true stud athlete, this kind of crap seems to pop up about them. Jerome Kemp getting in trouble after being a standup player for us for four years. John Randle (nuff said). J.R. Giddens. June Henley. The list of players that have gotten in trouble here at KU reads like a top ten list of some of the greatest athletes of the last 20 years.

It's just amazing to me that people that have the potential to be somebody's hero have to find some way to screw it up and set a bad example. Can't anybody show me a team with players that are great athletes and great people?

I'm not off the kid's bandwagon or anything, it's a fairly minor mistake that lots of kids have made, but hopefully he can learn from it and not become one of those athletes that ends up setting a horrible example despite accomplishing incredible feats on the field. One of your most important roles as a student athlete is that of a role model for the young kids that are fans of the game. Athletes should not underestimate their importance in shaping the personalities of the next generation.

I spent most of my childhood on the playgrounds pretending to be Magic Johnson, Micheal Jordan, Barry Sanders, ect. . . Today's youth probably spends it's time pretending to be Terrel Owens. . . God help us!

A theft under $1,000, as it was stated, is a misdemeanor. As a juvenille he won't face too much punishment from the law.

The poor kid made a mistake, it's not like this is going to ruin the program or some crap like that, it is what it is, it'll be dealt with appropriately and we'll move on. One shoplifting misdemeanor is not going to invalidate a national ranking or a BCS bowl. Let's just hope he can put those sticky fingers to good use on the field and that he's learned from this whole situation and bettered himself from it. Everyone makes mistakes, I just hope he's a better person for it!