Tigers come up rosy in opener 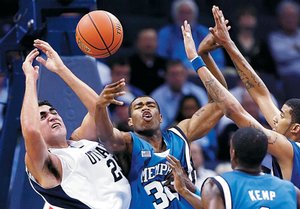 The highly touted freshman had 17 points, six rebounds and five assists in his collegiate debut and No. 3 Memphis beat Tennessee-Martin 102-71 on Monday night in the 2K Sports College Hoops Classic.

Rose was 8-for-16 from the field and had four dunks, bringing the 16,555 fans at FedExForum to their feet cheering each time. He also had a block on a breakaway in the first half that sent Calipari out of his chair and invigorated the Tigers' bench.

But how does the freshman rate his first performance?

His teammates weren't as modest.

"He does things that a lot of people haven't seen," guard Chris Douglas-Roberts said. "He deserves all the credit. It's crazy to think that was his first game."

Douglas-Roberts quietly tied his career-high with 28 points and grabbed eight rebounds for Memphis (1-0).