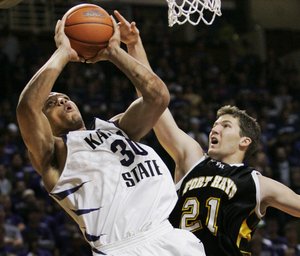 They came away from a 95-59 exhibition loss in Manhattan convinced the 6-foot-10 Washington, D.C. native is for real.

"He scores every way there is," Johnson said of Beasley, who totaled 35 points off 15-of-25 shooting and grabbed 14 rebounds against the NCAA Div. II Tigers in his collegiate debut in Bramlage Coliseum.

Tonight, just three days after watching Beasley score on dunks, layups, fadeaway jumpers and from three-point land, FHSU takes on another frightening foe: the No. 4-rated Kansas Jayhawks at 7 p.m. at Allen Fieldhouse.

KU freshman Cole Aldrich, who became friends with Beasley at the McDonald's All-America game, said the Jayhawks would not be concerned with topping the Wildcats' performance against a common foe.

"I wouldn't say so," Aldrich said. "Nobody really pays attention to K-State. I did hear Beasley played well. But that's them. We have our own team, our own aspirations to win the national title and all that.

"The score doesn't matter as long as we think we played well and coach Self thinks we did what we need to do," Reed said.

Jeffries will miss tonight's game, also, as he recovers from a broken bone in his foot that could keep him out two more weeks.

Starting in Jeffries' absence is Tyrone Evans, a 6-1 junior out of Independence Community College.

Evans scored 11 points off 4-of-9 shooting and dished seven assists against K-State.

"Tyrone is a combo guard pressed into point guard in these exhibition games," Johnson told the Hays Daily News.

Corbin Kuntzsch, a 6-4 freshman from Scott City, missed his only field goal try at KSU. Jake Sims, a 6-5 senior from Augusta, contributed 11 points off 3-of-5 shooting.

Fort Hays State, of the Mid-America Intercollegiate Athletics Association, is coming off its first losing season since 1992-93. The Tigers went 13-15 and placed seventh in the 10-team league with a 6-12 record.

Johnson - who has 11 first-year players - has embarked on a rebuilding process.

"We're trying to get more younger guys in the program, more stability," said Johnson, whose Tigers were picked to place seventh in the MIAA preseason coaches poll.

"What scares me, you have an 18-, 19-year-old kid matching up against a 20-, 21-year-old man. Going in this year, I felt this year was a rebuilding year, no matter what. We feel we have a chance to be there, come conference," he indicated.