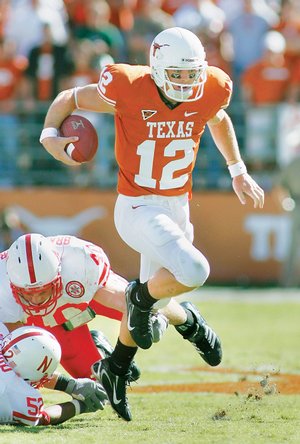 Just when Kansas University's football team had an idea on how Nebraska's defense would attack, the Huskers threw a wicked curveball before today's 11:30 a.m. game between the two teams.

The Huskers blitzed the house for most of the day in their 28-25 loss at Texas last week, a much more aggressive approach implemented by head coach Bill Callahan and defensive coordinator Kevin Cosgrove.

"We made a dramatic change in that regard," Callahan said. "We felt going to Austin, we needed a no-holds-barred approach going into the game. We just really tried to put as many people up there as possible and more or less storm the castle."

Callahan said he was concerned about how the secondary would hold up without the help, but the opposite ended up killing Nebraska: Texas running back Jamaal Charles rushed for 290 yards on 33 carries, including touchdown runs of 25, 86 and 40 yards in the decisive fourth quarter.

The question now is, was Nebraska's blitz-fest an isolated incident or a midseason change in direction?

"We can't take for granted that that was only prepared for Texas," KU coach Mark Mangino said. "We're working as though we will see some of that or possibly a lot of it. But we're prepared for their other schemes they used all year as well."

Overall, Nebraska didn't feature any new blitzes against the Longhorns that they haven't shown before.

But the frequency of them was alarming.

¢2005 revisited: The last time Nebraska traveled to Lawrence was a historic day for Kansas football.

It was Nov. 5, 2005, when the Jayhawks cruised, 40-15, to break a 36-game losing streak against the Huskers. It featured a slew of memorable highlights, including a 72-yard touchdown run by Jon Cornish, a sack by Eric Butler for a safety and a 40-yard interception return for a touchdown by Kevin Kane.

"It's one of those milestones we achieved," Mangino recalled. "You've got to stop the bleeding somewhere."

¢Brotherly love: KU third-string quarterback Tyler Lawrence is the older brother of Nebraska reserve linebacker Blake Lawrence, who currently is battling an injury and not expected to play today.

Both are Shawnee Mission West High grads. Tyler Lawrence enrolled at KU in 2006, and Blake soon after chose Nebraska over Kansas in a publicized recruiting battle.

Tyler, a red-shirt freshman, has only played in one game for KU this year and did not attempt a pass. Blake, a true freshman, has played in five games and has one tackle.

¢This, that: Today's game is only the second time in the series' history that an unranked Nebraska team is playing a ranked Kansas team. The other time was 1952, when Nebraska beat No. 7 KU, 14-13. : KU has just one Nebraskan on its roster: special-teams standout Micah Brown, who's from Kearney. : Nebraska has three Kansans: Injured linebacker Lance Brandenburgh (Overland Park), Blake Lawrence (Shawnee) and running back Kenny Wilson (Liberal). : Kansas has won 11 of its last 12 games, and its current eight-game winning streak is the sixth-longest in school history.