Plenty of experience returned to the hardwood this evening for Bill Self and the Kansas men. Kevin Romary has post-game highlights.

A season of much promise begins tonight for the 4th-ranked Kansas men's basketball team. This evening the Jayhawks open exhibition play against Pittsburg State.

The Jayhawks hit the hardwood of Allen Fieldhouse tonight in their first exhibition game. Kevin Romary has more from the fieldhouse. 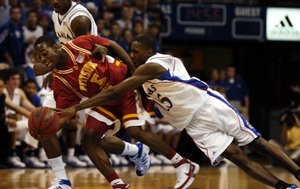 That is: "Can you remember the last time you scored in double figures in a college game?"

Tilting his head back for a second, the 6-foot-4, 200-pound senior from Seattle came up with an answer:

"Man : what game was it? I think it was in Washington : against my best friend, Nate Robinson," said Stewart, whose 11 points, four rebounds and three steals in 17 minutes helped the Jayhawks to a 94-59 exhibition victory over Pittsburg State on Thursday night at Allen Fieldhouse.

"To this day, he is still my best friend," Stewart added with a grin.

Amazingly, it was midway through Stewart's freshman year at the University of Southern California - way back in 2003-04 - when he scored 14 points in a Pac-10 road game at U of W.

On Thursday, his nine of 11 free throws and one bucket in three tries helped him enter double figures for the first time on Mount Oread.

His previous high was eight points last season in a regular-season game against Dartmouth.

Did he think it'd take him that long to reach double-digit land again?

"Nah, to be honest I didn't think it'd take that long," Stewart said. "But what I've gone through was worth it. It humbled me. I finally decided if I wanted to play, it was up to me. I had to do the work, do what it takes to get on the court and help my teammates win games."

Stewart - he has played sparingly at KU since transferring from USC first semester of what would have been his sophomore season - has come so far, KU coach Bill Self on Thursday said, "He probably deserves to start, but I like him in the role he's in, coming off (the bench) and giving us energy, changing the pace of the game."

Stewart hit six of eight free throws - his teammates just eight of 16 the first half - as the Jayhawks rolled to a 55-29 halftime lead. Stewart's successful free-throwing wasn't contagious. His teammates converted 10 of 22.

"It was one of those nights we didn't make free throws. I won't say it's conditioning, but maybe that's part of it," Stewart said of players not having their early-season wind. "We'll make them the next time out."

Stewart didn't have a perfect outing. At one point, he went in for a dunk, but wasn't able to convert. Instead he was hacked and awarded two points off a goal-tending call. He also made the free throw.

"I should have dunked on him. It happens," Stewart said.

He's hoping to put some down this year, like his favorite former KU player, Keith Langford.

"It's why I wear No. 5, because that's what he wore," Stewart said. "I love the way he plays. It's kind of my game, anyway, going to the basket. I'm still a Keith Langford fan to this day."

Might he be even a better defender than Langford?

"I love playing defense," Stewart said. "I always have loved defense. I get high on locking a man up. My strength is defense. At practice I go against guys like Mario (Chalmers, 14 points, four of five threes Thursday) and Sherron (Collins, 18 points, three of four threes), but I've also guarded Darnell (power forward Jackson, six points, three boards). It makes me a physical player."

Chalmers says to look for Stewart on the court a lot this season, even when Brandon Rush returns.

"Yes, he can score. I always thought he could score," Chalmers said. "He scored a lot in high school (in Seattle). He's going to help us this year."

I know it's exhibition/pre-season/early, but, man, why can KU teams not make free throws?

About the time I started wondering where Brady Morningstar was I heard the announcers of the game mention that he had not hit the court yet. Does anyone know the reason he did not play last night?

Morningstar may redshirt - its in another article today.

According to HCBS on the pregame show, there's a new rule that wouldn't allow non-freshmen from red shirting if they play in an exhibition game, so Self said they're still evaluating Brady for one more week to see if playing this year and losing the eligibility is the right move for him.

No kidding tis4tim! I was thinking the same thing when I read that.

When are today's college players going to realize how much "stats" are left on the floor at the free throw line?

We've had several players at KU over the last several years, that could have had much better scoring averages with a boost at the free throw line.

Just a lack of fundamentals in today's college game...no wonder USA is struggling in international competition...we don't know the fundamentals of our own game any more. Everyone wants their lastest dunk on ESPN...to heck with fundamentals.

Our own little petri dish FT experiment - Two years ago, DJ sat out the first couple months of the season because of the whole alumni/friend issue. All he could do was shoot FT on the side. Result - He shot the lights out from the line - 80+%. Last year, he can resume playing (and doesn't spend as much time practicing FT's). Result - 60%? There was no appreciable change in DJ's physque during that time.

The reality of FT's is that they aren't fun. It is more fun to play pick up games. Play games. Maybe it is unrealistic to think of the guys as being mature. Maybe they are just boys playing games.

The other reality of FT's is that missing them, especially the front end of 1-1's (in my book that should count as 2 missed FT's), is the same as a turnover.

How many losses over the years could have been averted by each player making 70% of their FT's?

Making 10-22 is horrible. Doesn't matter if it was an exhibition game. These guys need to understand the necessity of making at least 70% or above. Anything less is unacceptable.

I think this years team will be pretty good, but not final four or national title contenders. I hope they prove me wrong and I know it's just pre-season, but those free throws will haunt them. That was terrible to watch. I think Sasha Kaun is really bad! Most of the time he doesn't even look at the hoop before he shoots. His free throws shots will make you puke. I just think he is WAY overrated!

I did like Cole and Tyrel. I thought they both looked really good, especialy Cole.

Hey. I know this really doesn't concern the game at all. I just need to know, what's with the new uniforms? They are good looking, but where is the "classic" jayhawk lettering? How dare they screw with tradition!

It's football season. Good job Jayhawk basketballers in your first preseason game. Back to the topic: Football. Let's pack the hill with BLUE on Saturday. ROCK CHALK JAYHAWK!!!

Term of the day: Free throws.

I hate the new uniforms too. What's the deal with the font?

I hate them too. It really does bug me to see them change it. BRING BACK THE OLD LETTERING! Cmon Lew. There's nothing wrong with admitting you made a mistake. PETITION!!!!!!!

Slightly off topic, but did anyone see the beating the Celtics put on? I'm so excited Paul and Scot have a good chance to play Jaque for the championship!