KU breaks out against Chicago St.

Kansas University's Preston Land and Ryne Price each slugged home runs Friday night to lead the Jayhawks to a 12-1 victory against Chicago State in a seven-inning non-league baseball game at Hoglund Ballpark.

KU (24-28) wasted little time jumping on the visiting Cougars, scoring six runs in each of the first two innings.

Junior Erik Morrison's bases-clearing double and Land's two-run double highlighted the first inning, as the Jayhawks sent 10 men to the plate, with the first six all crossing the plate.

Price hit his team-leading 10th homer of the season deep to right field in the second inning, and Land followed two batters later with his fourth of the season. It marked the sixth time this season KU has hit multiple home runs in an inning.

Freshman left-hander Wally Marciel was the beneficiary of the early outburst. He improved to 5-2 by going five innings, allowing three hits and just one walk by striking out six. Junior Matt Lane pitched the final two innings for KU. 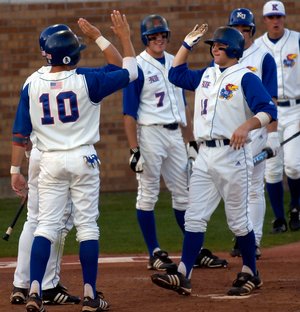 The Jayhawks will play host to Chicago State in a doubleheader today beginning at 1 p.m. at Hoglund Ballpark, and the two teams will close out the four-game set Sunday at 11 a.m.