Greensboro, N.C. — Rutgers' season was over, or so it seemed. Less than a second remained, and the ACC's player of the year was headed to the free-throw line to shoot mighty Duke back into the regional finals.

That's when dependable star Lindsey Harding missed a free throw, which would have tied the game. She then missed another and the Blue Devils' season was done and Rutgers advanced to the Greensboro Regional final.

"I believed it was our destiny," Rutgers coach C. Vivian Stringer said. "When she missed the second shot, I still believed."

Harding's two misses from the foul line with 0.1 seconds remaining preserved the Scarlet Knights' 53-52 upset of the top-seeded Blue Devils on Saturday.

"They just didn't fall," Harding said. "It felt good coming off. Everything felt good. It didn't really go down."

Fourth-seeded Rutgers (25-8) rallied in the final minute, taking the lead for good on Epiphanny Prince's coast-to-coast layup with 20 seconds left and holding on to claim its first berth in the regional finals since 2005.

"The only thing I can say is 'Wow,'" Stringer said.

Harding could have given the Blue Devils (32-2) the win - or at least forced overtime - when she stole an inbounds pass near midcourt, drove hard to the basket and was fouled by Myia McCurdy.

"Even with a foul like that, when you're up one and basically no time left on the clock, you have to keep thinking and believing, 'Maybe this year, this is the year we can succeed,"' Rutgers forward Essence Carson said.

Harding, a 75 percent free-throw shooter, missed both attempts hard off the back iron, and Carrem Gay's tipback as the horn sounded failed to come close. Harding fell to her back and covered her face in horror, while the Scarlet Knights celebrated their improbable rally at midcourt. 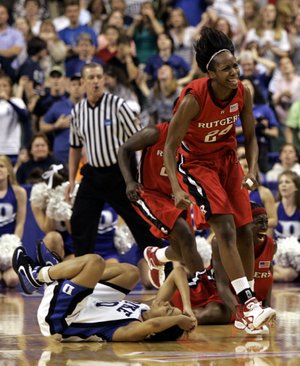 "My heart just breaks for her right now," Duke coach Gail Goestenkors said. "I just don't want this to be her lasting memory, because she has meant so much to our program."

Greensboro, N.C. - Arizona State finally got the chance to protect a lead in the NCAA tournament.

After rallying from 15-point deficits in each of the first two rounds, the Sun Devils got 16 points from last-minute starter Danielle Orsillo and led nearly the entire way to beat Bowling Green.

The win gave third-seeded Arizona State its first trip to the round of eight.

emotion-fueled run through the NCAA Tournament.

Houston scored 18 points, and Charles added 17 to help the top-seeded Huskies take control early in the second half before they held on for a victory over the fourth-seeded Wolfpack that ended coach Kay Yow's inspiring season.