Freshman star larger than life in win against Memphis

The big man, sitting out with three fouls, nodded.

"Let's go," Matta told him, adding his usual advice in such situations: "Play real hard and don't foul anybody."

Oden followed orders perfectly, dominating like only a 7-footer can over the decisive stretch in the second half to carry the top-seeded Buckeyes past Memphis 92-76 and into the Final Four.

While Oden was on the bench with his third foul, Ohio State (34-3) went from five points up to five points down. Then the fabulous freshman went back in and everything changed again.

Controlling the paint on offense and defense, he triggered a 20-8 surge that put the Buckeyes back in charge. The second-seeded Tigers (33-4) tried hanging in by fouling, but Ohio State foiled that plan by making 20 straight free throws. The Buckeyes' 21st straight win takes them to Atlanta next weekend for a national semifinal matchup with the winner of Sunday's North Carolina-Georgetown game.

In only 30 college games, Oden has taken over plenty of them. None, however, was as impressive as this one, mainly because it was so important.

"This would probably be No. 1 on the impact meter," Matta said. "I thought his rebounding, his challenging shots, finishing at the other end was tremendous."

In only 24 minutes, Oden made 7-of-8 shots and was 3-of-6 from the line with a block that came on the first defensive stand after he returned with three fouls. Two of his dunks were so powerful it looked like he was doing chin-ups on the rim.

Yet his larger-than-life presence was best exhibited on a crucial sequence midway through the second half.

Oden was wide open under the basket when caught a pass that arrived at the same time as Memphis' Chris Douglas-Roberts. The defender threw both arms around Oden's waist and shoved him for an intentional foul. Oden still made the shot, then one of two free throws, tying the game at 60. Ohio State got to keep the ball and went ahead 62-60. The Buckeyes never trailed again. 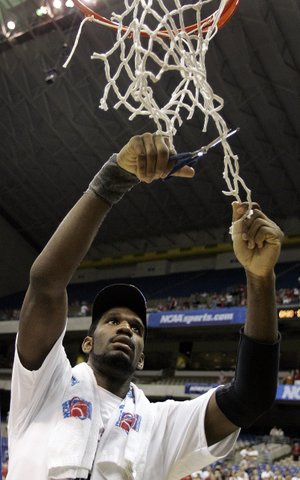 "I really hope it was an intentional foul because it was a difference-maker," Calipari said. "It really changed the game."

The Buckeyes last made the Final Four in 1999, when a team led by Michael Redd and Scoonie Penn lost to eventual national champion Connecticut. That trip later was expunged from the records because of NCAA violations, making their last official appearance in 1968.

Mike Conley Jr. - the son of a former Olympic star and Oden's high school teammate - set the pace for the Buckeyes with hard-charging drives. He scored 19 points and led Ohio State to its second-highest scoring game of the season. He also was named the top player in the region.

Lewis continued his steady tournament play with 22 points and six rebounds. Jamar Butler added 12 points. TAs this game turned into a rout, Ohio State fans, who'd anguished through big comebacks and crucial last-second shots the last two games, were breathing easily. Many were already wondering how much longer they'll get to savor Oden in scarlet and white.

Those at the Alamodome made their thoughts on the subject clear by chanting "One more year!" during the postgame, net-cutting ceremony. They later hollered, "Two more games," which could bring the Buckeyes their second basketball title and first since the 1960 club that featured John Havlicek, Jerry Lucas and a backup named Bob Knight.

Memphis fell a game shy of the Final Four for a second straight season. The Conference USA champs were riding a 25-game winning streak and plenty confident they could handle the Big Ten champs.

Tigers big man Joey Dorsey said Friday he was Goliath and Oden was "the little man." Score another one for David, as Oden held Dorsey to four rebounds and zero points, his first scoreless outing of the season. Dorsey also drew four fouls in 19 minutes.

"My coaches told me about it and I was just like 'Dang, he just called me out,"' Oden said. "I didn't try to think about it. I just wanted to go out there and play my game and not let his comments get to my head. In the Big Ten, you have fans say it all the time."