St. Louis — Go ahead, hate Florida all you want. But you can't beat these Gators. Not in the NCAA tournament.

Inside, outside, early, late - the Gators find a way to get it done when there's a title at stake.

Joakim Noah and his buddies are heading back to the Final Four, looking for a second straight national championship that was worth more to them than NBA millions.

"It's so great because we were under a microscope," Noah said after Florida's 85-77 victory over third-seeded Oregon in the Midwest Regional final on Sunday afternoon.

"There was so much hate. But we know that what matters is what's going on here."

Lee Humphrey made seven 3-pointers and finished with 23 points, and Taurean Green added 21. Noah had 14 points and 14 rebounds. It was Florida's 16th straight postseason victory, a stretch that includes one national championship and two Southeastern Conference titles.

Next stop for the top-seeded Gators: Atlanta, where they'll play UCLA in the national semifinals in a rematch of last year's championship Game.

"The ultimate goal is to do it again," Chris Richard said. "We're one step away from the championship." 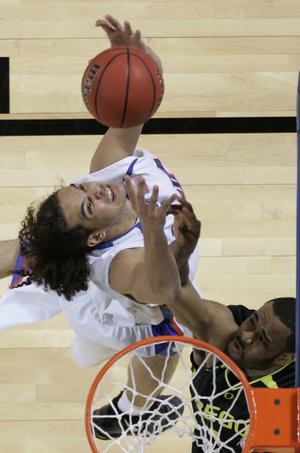 Florida's Joakim Noah (13) grabs a rebound away from Oregon's Malik Hairston (1) during the second half of the NCAA Midwest Regional final basketball game in St. Louis, Sunday, March 25, 2007. Florida defeated Oregon 85-77 and advances to the Final Four in Atlanta.

Florida beat UCLA last year in a rout, 73-57, for its first national championship - and the first half of what would turn out to be the Gator Slam. When Florida beat Ohio State for the national football title in January, the Gators became the first school to be champs in both sports at the same time.

Now Florida (33-5) would like to win both crowns in the same calendar year. And make a little history as the first team since Duke in 1991-92 to win back-to-back basketball titles - and the first ever to do it with the same five starters.

There might even be another date with Ohio State with a title on the line. The Buckeyes won the South Regional, and will play Georgetown on Saturday.

"It was a lot harder this year because night in and night out, we got people's best shot. We've had to adjust and it's just been really tough," Corey Brewer said. "It's been really rewarding because we've got the same five guys back and basically the same team.

"We just love playing with each other, and it feels so good to get back to the Final Four."

Oregon was trying to get to the Final Four for the first time since winning it all in 1939, the first year of the NCAA tournament. But the Ducks (29-8) were done in by foul trouble the entire game and by freshman Tajuan Porter going cold.

"I was probably a little too hyped," Porter said. "They had pretty good shot pressure. I just wasn't hitting my shots."

Porter, the 5-foot-6 guard who went off for eight 3s and 33 points in Friday night's regional semifinal, didn't make his first field goal until there were 40 seconds left in the game. He finished with 10 points, but was just 2-of-12 from the field.

Aaron Brooks led Oregon with 27 points, and Malik Hairston added 18 and five rebounds before fouling out with 3:54 to play. Maarty Leunen and Joevan Catron also fouled out, and Brooks and Adam Zahn finished with four fouls each.

"We lost that game," Hairston said. "They didn't take it from us."

The Gators have yet to play their best - or even a consistent - game in the NCAA tournament. They've had to come from behind in each game, and have yet to get a dominant performance from both their big guys and guards at the same time.

But half a Gator team is better than most wholes. After Al Horford carried the Gators in the semifinal, it was Humphrey and Green doing the work Sunday.

"We've always been a team that's tried to take what the defense gives us," Florida coach Billy Donovan said. "It was a game where we were going to have to make some 3-point shots and just not pound the ball inside. It was a game where our bigs didn't score a lot of points and our guards shot the ball very well."

After Brooks made a 3-pointer and followed with a layup to tie the game at 45 with 17:06 to play, the Gators pulled away. Green made a 3, then scored on a driving layup of his own that brought the Florida bench to its feet and gave the Gators a 50-45 lead with 16:18 to play.

The Gators being the Gators, though, they had to make it interesting.

Florida didn't make a field goal in the last 8:14 and missed seven free throws in the last two minutes, allowing Oregon to whittle a nine-point deficit down to four.

Porter's second 3 - his second basket of the game - made it 81-77 with 17.2 seconds left, but Florida put it away as Green went 3-of-4 from the line and Porter was called for traveling with nine seconds left.

"I don't think they beat us at our own style at all. No way," Oregon coach Ernie Kent said. "There were opportunities."

Not enough, though. As the final seconds ticked down, Florida's celebration was on.

Noah screamed, "Keep hating!" and "We win, we eat!" as the Florida fans roared with approval. The MVP of last year's Final Four, sprinted across the court, grabbed Donovan and hefted him in the air, shaking him.

"People really doubted us, especially when things were not going well," Noah said, referring to a stretch of three loss in four games late in the season. "People were trying to divide this team."

Nothing is going to separate this group, though. After the Gators accepted yet another trophy, they huddled together on the podium and rocked back and forth, whooping and hollering.

Then they climbed the ladders to cut down the nets - something they've gotten quite good at over the last two seasons.

But make no mistake: A regional title isn't why Noah, Horford and Brewer - all certain to have been lottery picks with Noah the likely No. 1 - put their NBA millions on hold last spring.

They want another title, and anything less will be a bitter disappointment.

"Just being able to come back and enjoying the process and playing with the guys, it's something I would never give up for anything," Horford said. "I'm really glad that we got the opportunity to come back and play."

Florida's slow starts in the NCAA tournament are getting to be a habit, and this game was no different. Just as Purdue and Butler did, the Ducks dictated the tempo of the game early, getting their guards free for easy shots and even dumping the ball inside to Hairston. They flustered Florida just as much on the other end, and the Gators had nine turnovers before the game was even 10 minutes old.

But after that ninth turnover, Florida settled in. Humphrey hit a 3-pointer that sparked a 20-9 run. Over the next 6 1/2 minutes, the Gators didn't have a single turnover and turned a five-point deficit into a 33-27 lead.

Humphrey capped the spurt with another 3. If ever a basket could be costly, though, this one was because it snapped a string in the net and brought Florida's momentum to a sudden halt.

It took almost 10 minutes to fix the net. When the break finally ended, Brooks scored nine straight points and Bryce Taylor dunked to pull Oregon within 40-38 at the break.

Ultimately, though, the Gators were too much for the Ducks. Just as they've been for everybody the last two years.

"To get into the Final Four like this, it's an unbelievable feeling," Noah said. "We're happy but we're not satisfied."