The big man finally looked like a freshman, getting mired in foul trouble as the top-seeded Buckeyes fell behind by 20 points before halftime. But senior Ron Lewis and fellow freshman Mike Conley bailed out Oden and lifted Ohio State past Tennessee, 85-84, Thursday night in the semifinals of the NCAA South Regional.

"In this tournament, the two most important words are 'survive' and 'advance,' and we've been very, very fortunate the last couple of games to do those things," said Buckeyes coach Thad Matta, whose club needed a furious final minute and overtime to get past Xavier in the second round.

Lewis, who hit the big three-pointer in the Xavier rally, scored 18 of his 25 points in the second half, and Conley had nine of his 17 from the foul line - including the winner with 6.5 seconds left.

But Conley missed a second shot, giving Tennessee one last chance. Ramar Smith grabbed the rebound and went all the way to the rim with Conley defending him. They went up together, and time expired with his ball in the air.

Then it was Oden to the rescue, swatting the ball into the Volunteers' cheerleaders and dropping back to earth himself with his biggest smile of the night, while Smith planted himself facedown in front of the Tennessee bench.

The Buckeyes (33-3) won their 20th straight game, keeping alive their longest run in the tournament since reaching the Final Four in 1999. They can get there again with a victory Saturday against Memphis, a 65-64 winner over Texas A&M earlier Thursday.

For the Volunteers (24-11), this was a second straight heartbreaking loss to one of the nation's top teams. The first was a 68-66 defeat in Columbus, Ohio, in mid-January when Oden had the first breakout game of his career. 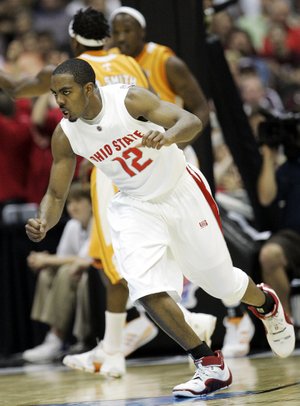 The 7-foot, 270-pound Oden scored only nine points, matching his lowest in 15 games, and set a season-low with three rebounds. He never fouled out, though, needing quick substitutions in the final few minutes to avoid getting disqualified. He played only nine minutes in each half, a season-low total of 18.

After the game, Oden needed stitches in his chin because of a collision during the second half.

"It was part of the game plan to get him in foul trouble. We just really didn't do a good job from the get-go (in the second half)," Vols forward Dane Bradshaw said. "We never got overconfident. That wasn't the case. Just, defensively, we didn't have that sense of urgency. That's what makes it worse."

Conley said he realized the Buckeyes could pull off the comeback after one look at the Volunteers when the second half started.

"We came out and saw their body language and knew as a team we had to be aggressive, attack," Conley said. "We knew if we took our shots, played our system, we'd be fine. There was a lot of time." 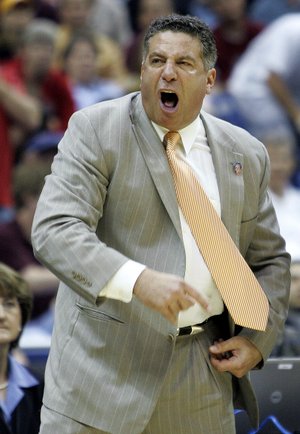 Tennessee coach Bruce Pearl encourages his team from the sideline.

Pearl was worried about how his team would match up with Ohio State, especially since the Buckeyes already had seen their frenetic full-court press in the first matchup. Although Pearl's fears came true, Vols fans are optimistic their second-year coach can parlay his strategies and enthusiasm into more long NCAA Tournament runs.

The halftime layoff seemed to drain Tennessee. The Vols weren't the same on either end of the court.

Neither was Oden. But his teammates were good enough that, on this night, it didn't matter.