San Jose, Calif. — Tim Jankovich, who played basketball at Kansas State University, fell in love with his college rival the past four years while working on Mount Oread.

"KU is a hard place to leave," Jankovich, Kansas University's fourth-year assistant coach, said Tuesday at a news conference in Normal, Ill., where he was introduced as the 18th coach in Illinois State history.

"Kansas is an amazing, amazing place. It is indescribable in terms of basketball support, tradition, the feelings. M.J. (Michael Jordan) said he played there once and it feels like the Fieldhouse sweats, and you feel that when you're coaching there. It's a hard place to leave."

Yet Jankovich did elect to leave to run his own program at ISU, a Missouri Valley Conference school in central Illinois that he says has great administration and facilities. Also, there are plenty of talented high school players to recruit in the state of Illinois.

"This is a special, special place. I feel that," Jankovich said of the school in the Bloomington-Normal twin-cities area, which also employed former KU chancellor Gene Budig as president and former KU athletic director Bob Frederick as Redbird AD.

"It was a hard pull to get us to feel like we wanted to leave the University of Kansas. We felt the pull."

Jankovich will not begin his new job until after KU completes the season. Danny Manning, KU's director of student-athlete development, will replace Jankovich as KU's full-time assistant once this 2006-07 campaign comes to a close.

"My head is spinning so much right now," Jankovich said. "Coach Self was amazing. I told coach if it was his wishes I would take myself out of this job search because I didn't want to do anything that could potentially (affect negatively) an unbelievable season. I told him if you want me to say I need to pull out or whatever I will do that.

"He's an amazing person. He said no way you can do that. You have to stay in this and we will take it as it comes and be honest with our players and not allow it to be a distraction. As I sit here I have a couple hats on. I feel a little funny about that, but that will be resolved. Coach Self said if this is good for you, then you need to do it. And he shoved me out the door." 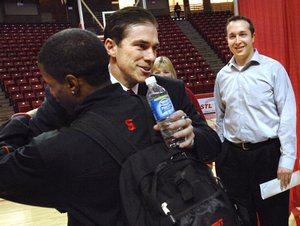 Jankovich is ready to compete against the likes of Valley schools Southern Illinois, Creighton, Wichita State, Missouri State and Bradley.

"This is such a tremendous time in Missouri Valley Conference history," Jankovich said. "Not since the days of Wes Unseld and Oscar Robertson has the conference been playing at such a high, national level. There are a lot of great coaches in this league and I'm friends with a number of them. It is easily one of the best coaching conferences in the country."

Zenger said Self called him to promote Jankovich for the opening. Zenger said Jankovich was chosen from about 70 candidates.

"In the end, it was his intellect that truly drew us to him as our final selection," Zenger said.

Jankovich, who was born in Gary, Ind., and later moved to Manhattan, said he grew up following former Redbird Doug Collins, a former NBA standout and Olympian.

"I have to pinch myself on the hour every hour to believe this is really happening right now," Jankovich said.

Of Jankovich, Self said: "He is a great hire. I am fired up for Tim and Illinois State too. He will get it turned around in a short amount of time. He's talented, bright, works smart, manages time well, is a good manager of people.

Jankovich said he had several individuals in mind for assistants' positions but did not name names.

Illinois is an amazing basketball state. Year in and year out the state keeps Illini, DePaul, SIU, Bradley, NIU, and Illinois State stocked with players, plus KU and MU always have some Illinois guys, plus neighboring B10 schools always have some too.

What do you bet we play a couple of games against Jank's team in the future, similar to how Williams scheduled games with Neil Dougherty at TCU (and other examples...)?

I appreciate each individuals life choices. WHY WHY Why do KU's coaches have to announce that they are leaving while we are in the midst of the big tourney. The focus should be 199% KU Basketball - what does this do to the team's confidence and attitude. Coach Williams did it - now Jankovich where is the Jayhawk RESPECT.

Been waiting for the day when Manning would/could step up and it will be a grand addition to the coaching staff. BUT again I say - timing and respect. DANG!

Best wishes to Mr. Jankovich and his family on their new journey.

I don't think the players mind one bit. They respect and look up to Jankovich quite a bit. I read one Chicago Tribune reference that stated how pleased the players were at hearing the news.

And then factor in Danny Manning being announced to fill that void.

Believe me, this team has been dubbed very "unselfish." They actually respect the name on the front of that jersey and know what they are playing for this year.

You bring up a very good point mscyndi, but I have a feeling all is cool in that Jayhawk locker room.

THANKS for input and reassurance - again I say the best to Coach Jankovich and his family.

I understand your concern, Cyndi, but I think this is an entirely different situation. There's a HUGE difference between a team's head coach announcing he's leaving, and just an assistant coach. As much as the players like Jankovitch, it can't be nearly the same blow as having your head coach, the man who promised you he'd be there for your whole career, bailing out on you. And it shows the kind of class that Jankovitch had that he offered to pull out of the search if it would mean a distraction to KU.