Chicago — Wisconsin seemed in a daze, almost like jittery rookies playing in their first NCAA tournament.

Texas A&M-Corpus Christi, the newcomer to college basketball's biggest event, looked like the veterans - at least at the start.

Flustered for most of the first half, Wisconsin overcame an 18-point deficit to beat the 15th-seeded Islanders 76-63 Friday in the opening round of the Midwest Regional.

"We don't fall apart when things aren't going our way," Kammron Taylor said after scoring all 24 of his points in the second half.

The Islanders (26-7) came out strong, scoring the game's first 10 points and later leading 25-7 against the stunned Badgers.

"We didn't finish it. You can't let up against a team like that when you get them down," Islanders coach Ronnie Arrow said.

"We played bad the first half. Probably as bad as we've played altogether as a unit. So it can't get worse," Tucker said. "I asked someone to take the lids off the basket because nothing would drop. Seemed like our shot selection got better and defensively our energy picked up." 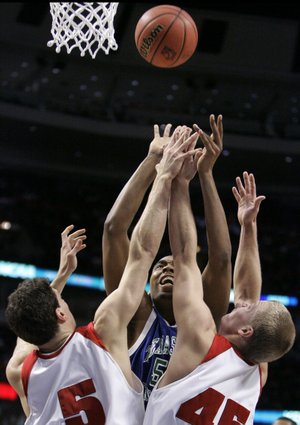 Texas A&M Corpus Christi's Chris Daniels (54) fights for a rebound with Wisconsin's Jason Chappell (5) and Joe Krabbenhoft during the second half of their Midwest Regional NCAA first round basketball game in Chicago, Friday, March 16, 2007.

With the defense finally stopping the Islanders, holding them without a basket for nearly nine minutes during the second half, Taylor supplied the offense. He scored 14 straight points at one stretch.

Taylor made his last seven shots to finish 7-of-15 from the field after missing all six of his first-half attempts.

"I hit my first shot of the game and everything just started to feel good from there," he said.

Seven-foot center Chris Daniels led A&M-Corpus Christi with 20 points. The Islanders, who began playing basketball in the 1999-2000 season, were bidding to become just the fifth No. 15 seed to upend a No. 2.

But they were hurt greatly by struggles at the free throw line in the second half. They missed eight from the line in the final 10 minutes.

"I wish the game had been over at halftime," Arrow said. "We had no doubt we could win the game. ... We thought our quickness would hurt them and we could wear them down."

Trailing by 18 with just more than five minutes left in the first half, the Badgers recovered with a closing 12-2 spurt. Tucker caught an over-the-shoulder pass from Taylor and dunked with seven seconds remaining to give the Badgers momentum after they were on the verge of being blown out.

The Badgers will need a better start Sunday against UNLV, which beat the Islanders by 10 during the regular season.

"I think Vegas will win the game," Arrow said.

The Islanders worked their lead back to 11 in the early stages of the second half, but the Badgers whittled it down methodically. Tucker had a 3-pointer, Jason Bohannon hit another from long range and then Tucker charged down the baseline and scored, bringing Wisconsin to 42-38 with 12:54 left.

Wisconsin tied it when Taylor connected on back-to-back 3-pointers, making it 47-all with 10:15 left.

Then Taylor sank a jumper with 9:36 left to give their Badgers their first lead and after a fancy dribble, he made another 3-pointer that put Wisconsin ahead 52-48.

A slam follow by Marcus Landry pushed the lead to eight with just more than five minutes remaining.

The Islanders raced out to a 10-0 lead in the first 3:10. Daniels blocked two shots, Taurean Mitchell hit a pair of 3-pointers and the Badgers missed their first six field goal attempts.

The lead ballooned to 17-4 on two free throws by Cedric Smith with just seven minutes elapsed in first half, and when Matt Slatnick hit two more from the line the Islanders had moved ahead by 15.

The Badgers simply couldn't find the basket, missing 15 of their first 17 shots and mustering just four points 11 minutes into the game against the hustling Islanders. On the same court five days earlier, Wisconsin shot only 4-for-23 3-point attempts in the finals of the Big Ten tournament, a lopsided loss to Ohio State.