With the shooting of Chris Douglas-Roberts and the inside presence of Joey Dorsey and Robert Dozier, the Tigers made it 23 straight wins Friday by beating North Texas 73-58 in the first round of the NCAA tournament.

Douglas-Roberts had 16 points, Dozier had 11 and seven rebounds, and Dorsey had nine points and 15 rebounds. Andre Allen added 14 points as Memphis overcame a slow start to grab control late in the first half and hardly let up against its Sun Belt foe.

The Tigers (31-4) are a different club from last year's squad that made the regional finals, but they expect to get at least that far. After all, they haven't lost since Dec. 20 and are seeded second in the South Regional.

The knock is that North Texas (23-11) is the caliber of team Memphis usually beats. The Tigers beat only three teams that made the NCAAs, none seeded higher than eighth. North Texas was 15th.

Memphis will be at it again Sunday, playing a second-round game against the Nevada-Creighton winner. 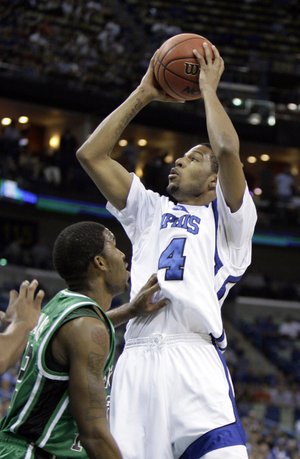 The Mean Green put up a good fight early, taking a six-point lead with baskets inside and out. They were still up four when Douglas-Roberts, an all-Conference USA pick and Memphis' leading scorer, got his third foul more than nine minutes before halftime.

Dorsey and Dozier made sure he wasn't missed.

Hunkering down near the rim on both ends, they loaded up on rebounds, tipped in some misses by teammates and kept North Texas from getting any easy baskets. The Tigers got the lead back quickly then used a 12-2 run at the end of the half to lead by nine at the break - a 13-point turnaround since the player known as "CDR" went to the bench.

North Texas pushed again early in the second half, but couldn't keep it up. After Calvin Watson blew a fast-break dunk that would've gotten the Mean Green within four, the Tigers stretched their lead to 17 - and had some fun along the way.

In a sequence that included three North Texas turnovers, Memphis got a fast-break layup by Allen, an NBA 3-pointer by Doneal Mack and a breakaway in which Allen slowed up then fed Douglas-Roberts for a dunk that thrilled a heavily pro-Memphis crowd that included former Tigers' star Penny Hardaway.

Memphis players say they get tested all the time. However, there's a difference between coming back against plucky North Texas - which finished fifth in the Sun Belt, then got the league's automatic berth by winning the conference tournament - and some of the clubs the Tigers will play if they keep winning.

Unable to be only the fifth No. 15 seed to beat a No. 2, the Mean Green can go home comforted by their school record for wins and their second NCAA trip. This game also was special for coach Johnny Jones, a Louisiana native who played and coached at LSU and used to coach at Memphis. He had a big crowd of supporters across from the North Texas bench.