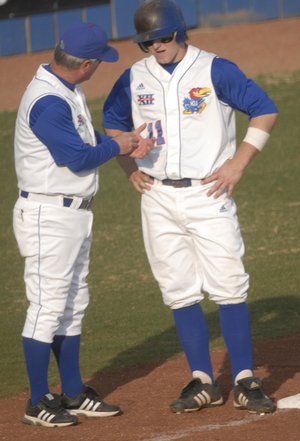 Kansas University baseball coach Ritch Price was upset that his squad stranded 22 runners as Arkansas swept the Jayhawks over the weekend.

On Tuesday at Hoglund Ballpark, they left nine runners stranded. However, that was half the number of runners who touched all the bases as Kansas pummeled Penn State, 18-5.

"I thought it was a really impressive offensive performance. That's probably the best thing of the day," Price said. "I actually thought we hit the ball decent in two of the three games we played over the weekend. We just left a lot of guys in scoring position, and hopefully it will be contagious and it will carry on into the weekend."

Robby Price scored the first run of the day thanks to a throwing error on a John Allman grounder following Price's double. Two batters later, Erik Morrison put the Jayhawks up by four with a three-run home run.

But Morrison's performance at the plate - 3-for-3 with a season-high five runs batted in - wasn't exactly what he anticipated before the game.

"I was about ready to hang up everything I own with baseball after my rounds with (batting practice) on field today before the game," Morrison said. "I felt pretty much terrible before the game started, so I was kind of wondering how this game was going to go. ... But really with me it's kind of the first at-bat that kind of gets me going. If I get off to a good start with my first at-bat - whether I get out or not - having a good at-bat kind of always leads to a better game."

Ryne Price followed Morrison's home run with a another shot over the big blue wall in center field.

Although put together a string of 11 consecutive batters retired. Reliever Thomas Marcin stretched that run to 14 n the fifth inning.

"He's been really good for us. He's been a staple for us out of the bullpen, and we've been able to use him in two or three innings at a time or use him for an inning to set up for (Paul) Smyth," the KU skipper said. "We're going to use him a lot. The best thing that happened tonight was that he only pitched four innings. We didn't think we'd have him available for Friday night (at Texas A&M), now he'll be completely ready now to relieve on Friday night as well."

Now the Jayhawks will turn their attention to a little tougher competition as No. 12 Wichita State visits Hoglund Ballpark for the first game of the squads' annual split series - which will have the second game played in Wichita on April 18. Price plans to send freshman Wally Marciel (2-1) to the mound while the probable starter for Wichita State is their ace lefty, junior Rob Musgrave, who is 3-0 with a 2.10 earned-run average.

"It's always a fun game with 2,000 people in the stands," said Allman, who helped lead KU to a home victory over the Shockers last year, going 3-for-5 with three RBIs. "Wichita State is a good rivalry, so it should be fun."