The sixth inning still might be going from KU's 18-2 victory against Tabor College on Tuesday afternoon.

Kansas scored 11 runs in the inning, sent 15 batters to the plate, went through two Tabor pitchers, day turned to night and the KU players forgot what inning it was.

Price did score twice in the sixth inning and also scored a game-high three runs for the Jayhawks. He also got out of a bit of a slump, going 3-for-3 with a walk, and he was hit by a pitch. It was an opportunity for several Jayhawks to find their swings and get at-bats. Kansas sent 18 players to the plate and had 13 different players come away with hits.

"It's definitely a game that you need to get out there and get as many hits as you can," KU shortstop Erik Morrison said. "In this game you need to be greedy, go up there and want to get five hits."

The Jayhawks didn't have anyone come away with five hits, but they did send 18 players to the plate and had 13 different players get a hit.

Tabor, an NAIA school, was a late addition to the schedule because of the cancellation of the series against North Dakota State earlier this season because of weather and poor field conditions. The Bluejays held a 1-0 lead after the first inning, but it quickly became apparent that they were no match for a D-1 opponent.

"When you're the University of Kansas, you should dominate, and anything less than that would be a brutal performance," KU coach Ritch Price said.

The Bluejays stayed within striking distance of the Jayhawks until that sixth inning when the lead went from 6-2 to 17-2. Kansas had 12 batters reach base in the sixth - seven with hits, four with walks and one - Robby Price - hit by a pitch.

Robby Price was the lone Jayhawk to play all nine innings against the Bluejays. He entered the game with only a .245 average, but after the first three-hit game of his college career, his average is up to .288. He also extended his hitting streak to seven games. 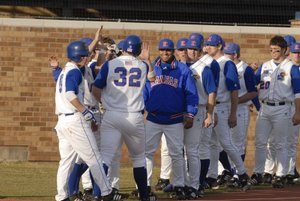 "Robby has been one of the best players his whole life every place he's ever played," his father and coach Ritch Price said. "He's been off to a little bit of a slow start, and it was good for his confidence to get that average up to near .300. I have no doubt when the season is over he'll be up over .300 and could lead our team in hitting."

Ryne Price, Robby's older brother, also did the family proud with two hits and a solo home run in the second inning to tie the game 1-1. It was his third home run of the season.

Kansas improved to 10-5 on the season with the victory. Starting pitcher Wally Marciel recorded his second win of the season after allowing one run in 42â3 innings. Matt Lane relieved Marciel and also gave up one run in 11â3 innings. Ryotaro Hayawaka, Hiarali Garcia and Max Ellenbecker each pitched one scoreless inning.