KU boathouse along Kaw gets go-ahead

Kansas University Athletic officials hope to build a $6 million boathouse for the KU rowing team at Burcham Park. Lawrence city commissioners on July 17 approved moving ahead on negotiations to lease a portion of the park to KU for the project, illustrated above. 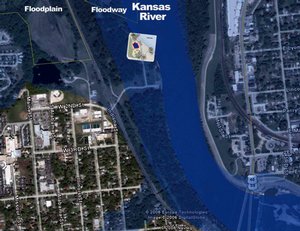 City commissioners Tuesday evening jumped at a chance to make Lawrence look more like its moniker of River City.

Commissioners unanimously told staff members to move ahead on negotiations that would allow Kansas University to build a $6 million boathouse for the KU rowing team at Burcham Park along the Kansas River.

"This is something that could truly anchor the riverfront as we look to the future," City Commissioner Mike Amyx said.

The project would be funded entirely by KU. University leaders had promised the KU women's rowing team a state-of-the-art facility when the sport was elevated to varsity status in 1995.

Currently, the 72-member team has a dock on the Kansas River, but uses a small fenced area at the park to store its boats. The new two-story building - complete with boat storage, locker rooms and training facilities - would be a major improvement for the team and the park, KU leaders said.

"My impression is that a lot of the neighbors in that area don't go to that park because of safety issues," Steven Maynard-Moody, the team's faculty adviser, said of the park near Second and Indiana streets. "The biggest way to improve safety is to just get positive activity in the park."

No one from the public came to the meeting to oppose the project. Some users of the park on Tuesday, however, cautioned the city to be mindful of not allowing the building to change the park's natural setting.

"I want them to remember that a park is a park," said Scott Frazier, a Lawrence resident who rode his bike to the park Tuesday to watch the river. "It should be green space."

Lawrence-based Treanor Architects is designing the project. Andrew Pitts, an architect for the company, said plans called for the building to be kept off the bank about 75 feet so that it would not dominate the landscape. The location of the building would be north and west of the existing shelter house at the park.

The building also is being designed to withstand flooding. The bottom floor - with 16-foot ceilings - would be for boat storage and would be constructed so that water could safely flow through during flooding events.

KU rowing coach Rob Catloth said his team practiced almost every day from late September to May. He said he'd like to see the boathouse host two to four competitions - regattas - each year.

The building also may be open to the public at times. Catloth said he would like to explore a partnership with the city's Parks and Recreation Department to create a community rowing program.

"It would offer us a chance to do sports camps and community learn-to-row classes," Catloth said. "Right now we don't have that opportunity because there's really no facilities."

Commissioners approved moving ahead on negotiations to lease a portion of the park to KU for the project. The building still must receive necessary Planning Commission and land use approvals. Ultimately, commissioners will have to formally approve the lease and the entire project later this year.

Is there really a need to have such an obscenly large picture file for the artist's rendering. Get off your lazy asses and scale down the size of these photos for chrissake.