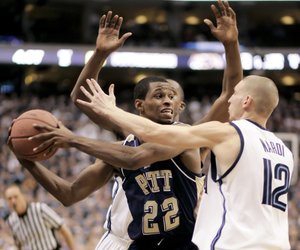 Pittsburgh's Antonio Graves (22) looks for an open man as Villanova's Mike Nardi, right, and Dante Cunningham defend. A three-pointer from Graves in the closing minutes helped the Panthers hold off the Wildcats, 65-59, Monday in Philadelphia.

Philadelphia — With its inside game stifled, Pitt got its transition offense going just in time.

Levance Fields scored 20 points, and Aaron Gray had 14 points and 10 rebounds, leading No. 7 Pittsburgh over Villanova, 65-59, on Monday night.

Antonio Graves had 13 points, including a clutch three-pointer in the closing minutes, to help the Panthers win for the 10th time in 11 games. Pitt set a school record by reaching the 20-win mark for the sixth consecutive season.

"It was great to make some adjustments," Pitt coach Jamie Dixon said. "We were playing stationary. We got better movement and more penetration in the second half."

Curtis Sumpter scored 21 points for Villanova. The Wildcats were seeking their third victory over a ranked opponent this month.

Fields' fastbreak layup broke a 47-all tie with 6:03 left, and Pitt led the rest of the way. Another layup by Fields following a turnover made it 51-47.

Mike Nardi's layup cut it to 54-51. After a turnover, Nardi banked one in just before the shot clock expired to cut the deficit to 54-53.

But Graves hit a three-pointer, and Fields added another three to give Pitt a 60-55 lead with 51 seconds remaining.

The 7-foot Gray then blocked Sumpter's shot and Graves iced it with a pair of free throws.

Indianapolis - Pete Campbell scored 17 points, and Butler avenged one of its two losses.

The Bulldogs, reaching 20 victories in the fewest number of games in school history, hit their first five field goals, all three-pointers by different players, and coasted the rest of the way.