While proud of KU's current 23-game winning streak in Manhattan, Von Moore welcomes Huggins' arrival and a renewal of what once was a heated KU-KSU rivalry.

It was heated partly because of the fans.

"When I think of playing at K-State, I think of the banana incident," said Von Moore, boys basketball coach at Chicago's Tilden High.

The 6-foot-9, 230-pounder had a bunch of bananas tossed in his direction during pregame introductions prior to the Jayhawks' 75-63 victory over the Wildcats on Feb. 11, 1978, at old Ahearn Fieldhouse.

"It was like the whole damn town bought bananas and brought them to the game," Von Moore said.

"They covered the floor in a nationally televised game. It took an hour to clean that floor, there were so many. It was like everybody in the stands had bananas."

It was in response to KU fans flipping a handful of hot dogs onto the court at a K-State player before the Jayhawks' 56-52 victory over the Wildcats a few weeks earlier at Allen Fieldhouse.

"It all started when our fans threw hot dogs out there when they introduced Redding. I think that was his name," Von Moore said, correctly identifying flashy KSU guard Curtis Redding.

"It was a big deal. When we went down there (for the rematch), we heard what they were going to do. We heard they were going to throw stuff at us. Instead of going onto the court, we all went down and shook coach Hartman's hand when we were introduced. We figured out it'd be safer to go stand by him," Von Moore added of legendary coach Jack Hartman.

Of course, the bananas aimed at Von Moore were no laughing matter.

"It ticked us off," Von Moore said, "because at first we thought it had some racial connotations. They were basically calling us gorillas. Later they said we threw hot dogs so they threw bananas. It's just food. We beat them, so that's what mattered."

Von Moore, who played at KU from 1974-78, pointed out the KU-KSU games were much bigger than the KU-Missouri games at that time. 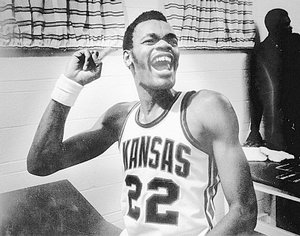 Donnie Von Moore played at Kansas University from 1974-78. Now a high school coach in Chicago, Von Moore says he's glad there appears to be some life in the KU-Kansas State rivarly.

"It's because the fans hated each other so much," Von Moore said of games between "Snob Hill" and "Silo Tech."

"It was a rivalry where I guess they were depicted as these farm, country, backwoods types, and we were considered the snobs, I guess, because we were close to Kansas City. KU was the snobby part of the state. K-State was the agricultural school. They actually had a farm on their campus. It was the big thing with the two groups. With Missouri, it went all the way back to the damn war.

"But people didn't sleep out for Missouri. They camped for K-State for days."

Von Moore said as a proud alumnus who still follows the Jayhawks, he welcomes the return of a strong hoops rivalry with K-State.

"I don't care about 'The Streak,''' he said. "I just want them (Jayhawks) to play well and mature. These kind of games do it because there is a rivalry, a lot of pressure in these games.

"Twenty three in a row is a serious accomplishment considering the rivalry. But K-State hasn't been that good lately. They've been a better football team than basketball for a while now."

Von Moore said he catches as many KU games as he can on TV and closely follows freshman Sherron Collins, who played basketball at Crane High, which is in the Chicago Public League with Tilden.

"One of my freshman coaches is a good friend of Sherron," Von Moore said. "He is big news here. He is coming on strong. He plays baseball real well, too. He threw a no-hitter against Tilden his senior year."

Of another fellow Chicagoan, Von Moore said he noticed a similarity in his and Julian Wright's physique - long arms.

"Yes, but we didn't play that type of game," Von Moore said of a fast-paced attack, indicating Wright was great on the break.

"KU is really good, man, but they are still young," he added, noting Collins is a freshman, Wright a sophomore. "Hopefully, when they get to the NCAA Tournament, they'll have some luck. It seems they make rookie mistakes when they are in close games. You get older, those mistakes are limited. Hopefully the luck is with them because that's what it takes a lot of times."

"It's just food" is malarkey.

That same thing happened to a black goalie in the NHL, and not long ago either.

Throwing hot dogs at a "hot dog" (flashy player) is not something I'm proud our fans did, but it's not bigotry like our Silo Tech counterparts exhibited.

If it wasn't racially motivated, then why didn't they throw hamburgers or grapes or oranges or something. Come on. See through it. I know that was long ago. But call it what it was and don't try to mask it as something else. It was racially motivated. No doubt. No excuses.

That was a different time and a different place. But call it as it was and don't try to rewrite history just because it was not pretty. That's all.

I think the best two sentences of the article were the last two...one of the better perspectives on the current team I've heard:

"It seems they make rookie mistakes when they are in close games. You get older, those mistakes are limited. Hopefully the luck is with them because that's what it takes a lot of times."

It's easy to forget how young this team is sometimes.

NIce to hear from former Hawks and find out what they are up to!

Why doesn't the article make mention of the racial relations aspect of the insult. It's not just food, I agree with crooner. That's something Huggins should say on recruiting trips- "Our fans are hate-filled racists'.'

The article did mention it, but the focus of the story (and some of those bananas) dismissed the racial connotations. I think the point of the article is that KU and K-State have always walked the line with each other.

I imagine they threw bananas because seed crops were too precious. ;)

I hope that we will kick their ass.

BREAKING NEWS (not a hoax): Posted on ESPN

Somehow, no one should be surprised that New Mexico coach Ritchie McKay suspended J.R. Giddens essentially for being selfish. This is the same player who was pushed out at Kansas, not just for his role in a fight at a bar but also because of his inability to mesh with the Jayhawks and the staff.

When McKay took on Giddens, he was certain that Giddens would be a new man, a player who wouldn't be all about himself. He even pumped him up to be an NBA lottery pick. Well, that Giddens is still lost somewhere between Lawrence and Albuquerque, because the one that arrived didn't measure up to all the hype.

"I just felt like we needed to continue to emphasize the important parts of our program and [one of those is] being a good teammate," McKay said Sunday night about his decision to remove his leading scorer. Giddens missed four other games this season due to injuries.

I am glad the likes of Giddens and Giles are gone. Selfish playing? No shock. Nothing but a headcase. Giddens should be thankful he left here with any dignity. He surely has none.

Gary Bedore needs to grow some balls. Yesterday he implied that no one booed Dean Smith at the game Saturday--not quite the case. And now, in this story, he fudges on the facts: he fails to correct Von Moore's statement that the bananas were directed at the entire KU team and may or may not have been racially motivated. But there's a reason he interviewed one Jayhawk in particular for this story--Von Moore---and Bedore knows very well what that reason is, yet he glosses over it.

Gary, you're supposed to be writing news journalism, not public relations. So start asking the tough questions, and start telling the real story, not mealy-mouthed fabrications.

Well..I was sitting one row in front of Dean Smith, right behind the bench and I certainly didn't hear any boo's. I'm glad I wasn't surrounded by a bunch of idiots heckling Dean Smith because he chose to wear a "light blue" jacket. I've seen Roy a couple times this year wearing a "KU blue" tie on the sidelines while coaching, my gosh what was he thinking.

Don't you remember how classy Dean was when he recruited Coach Williams away from his beloved alma mater. I heard the boos loud and clear from where I was sitting. Dean is a Trader and probably taking notes during the game in case his team plays KU in the dance.

"Dean is a Trader"

What does he trade?

I am definitely not the biggest fan of Dean though. I am just done caring about anything UNC.

This story brings back memories - I was actually at both of the games that year...and I was one of the fans throwing hot dogs at Redding, the biggest hot dog in the Big 8. We were careful to dry off the hot dogs with paper towels so they didn't make a mess on the court.

The game in Manhattan was nationally televised and my roommate and I talked to coach John Wooden before the game. We weren't wearing KU stuff because we were sitting in the KSU student section at Ahearn; we told Wooden not to tell anyone but we were KU fans. He told us not to tell anyone but he was rooting for KU as well!

In addition to the "Missing Link" posters, they also had signs that said "Donny Von Ugly"...typical KSU behavior. Didn't matter...Wilmo Fowler lit them up that game and we won by 12.

Jimhawk- Don't you remember how classy Dean was when he recommended a little known assistant named Williams to take over the job at his beloved alma mater? And I won't even mention coach Brown, who came from the Dean tree also.

Is that what you mean by "Trader"?.. He traded himself for a coach who got us a national title and another who made us the winningest team in the 90s?

I think everyone's missing the point of the article, namely the possibility that the KU-KSU basketball rivalry may be renewed with Bob Huggins' arrival in Manhattan.

Donnie is right, KSU was the main rival in basketball during his years at KU. Missouri was our big football rival. Usually someone from State would do something in Lawrence the week of the big game (Purple bubblebath in the Chi-O fountain comes to mind.) On the other end, KU fans painted the "KSU" Kansas blue in Manhattan. Those were good clean fun pranks compared to causing a disruption of a nationally televised game by throwing bananas on the court. I was at the Phog when the hotdogs were thrown, and as I recall, the cleanup only took a couple minutes.

Neither K-State's nor Missouri's stadium was a safe place to be a KU Marching Jayhawk, as liquor bottles tended to be thrown in our direction. I don't believe KU's students were as stupid, vocal maybe, but not malicious toward the other bands.

Hopefully the rivalry can be played out cleanly this time around.

No such thing as a "former" Hawk, once a Jayhawk always a Jayhawk. The 7782(77-82) is the years I attended Kansas (yes it took me five years to graduate..too much partying at the Hawk) and I remember Kansas State being a much bigger rivalry than Missouri. Maybe Huggins can bring that back.