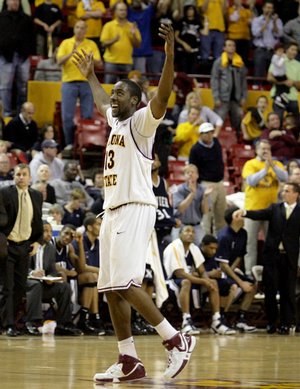 He looked perfectly healthy Saturday afternoon, scoring 19 points to lead Arizona State to a 77-55 rout of No. 17 Xavier.

"I've felt this bad before, but as far as played this good, no way," said Abbott, who brought a box of tissues to the postgame news conference.

It was ASU's first home victory over a ranked nonconference opponent since Dec. 20, 1980, when the Sun Devils defeated No. 7 Ohio State. The Sun Devils (7-2) typically load their nonconference schedule with teams from marginal conferences, but it appears they're ready for the tougher tests that are sure to come in the rugged Pac-10.

After losing 21 straight games to ranked teams, the Sun Devils have won two in a row over Top 25 opponents, with the other coming against No. 22 USC last February.

"How we played today is how we need to play every game," forward Jeff Pendergraph said. "We know what it is. We've done it now. Now it's time to keep this going and carry this on in Pac-10 (play) and just keep punishing teams like we're doing right now."

Pendergraph, a junior, was ASU's only upper-class starter on Saturday. In what is believed to be a first for ASU, the Sun Devils started four freshmen - guards Abbott, James Harden and Jamelle McMillan and forward Rihards Kuksiks.

Nashville, Tenn. - Joey Dorsey, Robert Dozier and Shawn Taggart scored 11 points apiece, and the Tigers shook off the rust from an 11-day break

With the victory, the Tigers improved to 8-0 and matched their best start since the 1995-96 season and their fourth such start since World War II.

The Tigers outshot (49 percent to 26) and outrebounded (38-30) Middle Tennessee in a game they never trailed.

Washington - Freshman Austin Freeman scored a season-high 21 to lead the Hoyas, who had a double-digit lead after 31â2 minutes against the Highlanders in a first half that featured several scuffles and two double technicals.

Los Angeles - Darren Collison scored 20 points, and the Bruins rolled past the Bengals, the first time in three games that UCLA didn't have to rally to win.

Ben Howland earned his 100th victory as UCLA coach, tying him with John Wooden and Steve Lavin as the second-fastest to do so.

East Lansing, Mich. - Drew Neitzel scored 18 points, including three three-pointers in the first half, to lead the struggling Spartans past IPFW.

Marquise Gray had a season-high 15 points, and Raymar Morgan added 12 for Michigan State.

Milwaukee - Jerel McNeal had 13 points, Lazar Hayward added 12 points and seven rebounds and the Golden Eagles showed no letdown from an emotional victory over Wisconsin.

After a week off following the victory over the Badgers, Marquette opened with a 14-0 run against the Hornets and was never seriously threatened.

Even with lots of Tennessee orange, Hilltopper red filled up a good share of the seats, with most of the 18,010 fans who bought tickets for the doubleheader sticking around for the late game.

Bloomington, Ind. - Eric Gordon made his first five three-pointers and finished with 26 points, and D.J. White produced his sixth straight double-double to lead the Hoosiers.

Indiana closed out its 24th consecutive home victory with a 15-0 run early in the second half.

Indianapolis - A.J. Graves scored 25 points and hit several big shots late in the game, helping the Bulldogs make up for an upset loss last week to Wright State with a victory in the Wooden Tradition.

Mike Green scored 14 of his 20 points in the second half, and Matt Howard had 11 points for the Bulldogs.

Purdue had lost at Clemson and Missouri, but this time handled a late challenge at Conseco Fieldhouse to get their first victory over a big-name opponent.

Trent Plaisted had 18 points and matched a career-high with 18 rebounds.