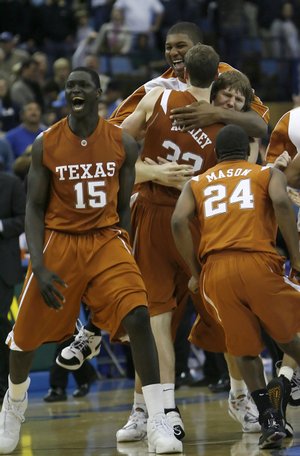 The Texas Longhorns celebrate after defeating No. 2 UCLA. The Longhorns prevailed on the road, 63-61, Sunday in Los Angeles.

Los Angeles — Damion James had stars in his eyes playing No. 2 UCLA at Pauley Pavilion. Not so much, though, that he couldn't finish off an upset victory for Texas.

James dunked with eight seconds remaining, and the eighth-ranked Longhorns won, 63-61, after blowing all of a 16-point, first-half lead Sunday in the Big 12/Pac-10 Hardwood Series.

James and D.J. Augustin finished with 19 points each, and the Longhorns (7-0) survived their closest game yet after winning their first six by at least 15 points. James had 10 rebounds for his second double-double of the season.

"It's like a dream come true," said James, who led a Longhorn celebration at midcourt in front of 96-year-old former UCLA coach John Wooden and Denzel Washington. "Him and Denzel, wow, man."

Tucson, Ariz. - Jerryd Bayless scored a season-high 26 points, and Arizona rallied from a 20-point first-half deficit to hand the Aggies their first loss.

Chase Budinger added 19 points, and Jordan Hill had 13 for the Wildcats, who won for only the second time in their last eight home games against major-conference opponents.

Fort Worth, Texas - Tony Crocker had 20 of his 24 points before halftime while Oklahoma built a big lead.

Crocker made six of seven 3-pointers, including consecutive long-range shots that gave Oklahoma an early 14-4 lead 51â2 minutes into the game. After Henry Salter made a layup for TCU, Crocker made another 3-pointer, and the Sooners had a double-digit lead that kept expanding.

The Cardinal have now won four straight since a 12-point loss at Siena on Nov. 17.

Nebraska trailed 21-14 after Jerren Shipp's 3-pointer with 8:31 remaining in the first half. But the Sun Devils didn't score again the rest of the half, and the Cornhuskers scored 16 straight points to take a 30-21 lead.

Aleks Maric and Ryan Anderson added 14 points each for Nebraska.

Norman, Okla. - Courtney Paris had 22 points and 15 rebounds for her 67th straight double-double in Oklahoma's rout of Arkansas State.

Paris went 10 of 12 from the field as Oklahoma never trailed and extended its winning streak to four games after opening with losses to the last two NCAA champions, Maryland and Tennessee.

Fort Worth, Texas - A'Quonesia Franklin scored 19 points, including three 3-pointers in the game-turning run, and No. 13 Texas A&M went on to beat TCU.

Patrice Reado's layup with 17:37 left in the game tied the game at 32, and started a 21-4 run for the Aggies. Franklin hit a tiebreaking 3-pointer on the next possession to put Texas A&M ahead to stay, then made another with 10 minutes left to stretch the lead to 50-36.

Austin, Texas - Brittainey Raven had 19 points and a career-high seven assists to lead No. 24 Texas.