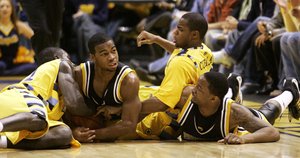 Milwaukee — Nevermind any city bragging rights. Jerel McNeal and No. 13 Marquette were just happy to get an easy win over Wisconsin-Milwaukee.

McNeal scored 16 points and backcourt mate Dominic James had 22, powering the Golden Eagles to a 100-65 rout of their cross-town rival Friday night in their first meeting in nearly a decade.

"The biggest thing to us was that this was the next game on our schedule," McNeal said. "We wanted to come out and show the improvement we have made since we came back from the Maui Invitational."

Lazar Hayward added 19 points and David Cubillan 12 for the Golden Eagles (5-1), who looked sharp even though they had been idle since losing to Duke on Nov. 21 in the Maui title game.

Marquette has now beaten the Panthers in all 35 meetings dating to 1917.

The two teams had not played each other since Dec. 8, 1998, when the Golden Eagles won 77-56 and UW-Milwaukee coach Rob Jeter was an assistant under then-Marquette coach Mike Deane.

"Rivalries are formed by the players on the floor and over a period of time with close games," Marquette coach Tom Crean said. "You can't create anything just because you talk about it and want it to happen."

Wisconsin-Milwaukee had tried for several years to renew the series before Marquette relented this season. The Panthers play their home games across the street from Marquette at U.S. Cellular Arena, making for a short road trip.

"The intent has been for the right intentions," Jeter said of scheduling the game. "Nothing other than we're both right here, we both play right next door to each other and let's just play. That's all it's ever been about."

Duke Crews nearly had a double-double, finishing with 10 points and nine rebounds.

Tennessee built a double-digit lead six minutes in and maintained it the rest of the way, with the final margin representing their biggest lead.

The Ragin' Cajuns allowed the Volunteers to hit 53 percent of their shots from the floor.