Bill Self, who said he had not broken 80 on the golf course all summer, appeared a bit embarrassed as participants in his Boy Scout Classic bid for his services Monday at Lawrence Country Club.

"If they bid more than 10 or 15 bucks for me to play with them, they definitely are not getting their money's worth," Self, Kansas University's basketball coach, said with a grin.

Actually, the top offer of $2,000 - presented in support of the Boy Scouts of America - turned out to be a bargain.

The team of Self, Ben Kirtland, Sean Lester, Gary Marvin and Jon Zylstra won the scramble-format event with a 17-under-par score of 53.

"I don't know what that was for, hopefully a way to raise more money," Self said sheepishly after a spirited auction decided which foursome would gain KU's fifth-year hoops coach as an additional member.

Now that school has started, Self, one of 106 participants in the benefit, soon will be putting his clubs away until next spring.

"Gosh, I hope it's not the last round of the summer," Self said. "I hope I can sneak out some more, but we're counting down the rounds now. I guarantee it's on one hand."

Self has been spending most of his time running individual workouts for his players, as well as recruiting.

"We'll be busy," Self said. "We've got a lot of homes to go into because we're trying to sign so many kids."

KU will lose five seniors off this year's team with others possibly bolting for the NBA.

He likes what he has seen in this year's KU squad early in the semester.

"I'm excited every year about the season. I think that this year and last year combined would probably be as excited as I've been about our returning level of talent. I'm really excited about the progress our guys have made, especially Brandon's health, because I do think he's doing very well," Self said. 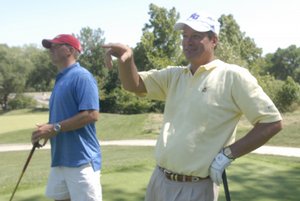 Rush, KU's 6-foot-6 junior guard from Kansas City, Mo., who had right ACL surgery on June 1, started running last week. Rush has said he'll be back on the court "by Dec. 1 or a month ahead or behind either way."

Self also has been encouraged by the work ethic of freshmen scholarship players Cole Aldrich and Tyrel Reed and walk-ons Conner Teahan and Chase Buford.

"They are great to be around," Self said. "They are working hard. We cannot expect them to have the same role that Julian (Wright), Mario (Chalmers) and Brandon had when they first got here because those guys didn't have guys in front of them. These guys have guys in front of them. They'll pay their dues, but they are all going to be good players."

Good cause: Self is a major supporter of work of the Boy Scouts.

"There are different things that can affect our youth in the community in a positive way, and certainly Boy Scouts is a big part of that," Self said. "We need more kids to take advantage of the services they provide."

His own charity: Self plans a big ASSIST Foundation fundraiser the weekend of Late Night in the Phog, Oct. 12-13. A year ago, 10 fans pledged $10,000 apiece for the right to shadow Self from Friday through Sunday of Late Night weekend.

"Details are getting worked out now," Self said. "It should be a fun weekend. Last year's was a huge success. Everybody enjoyed it. Hopefully, we'll get 10 or 15 people who want to be around the basketball program, take part in it."

Self's desire is to raise hundreds of thousands of dollars for organizations such as Boys and Girls Club, Salvation Army, Parks and Recreation, Big Brothers/Big Sisters, the school system and children's cancer research, as well as any other areas in which youths are served.

"Illinois, Kansas State and Kansas have something different to offer me," Little told Rivals.com. "I just like the situation at Kansas State. They are brining in some great players, and there is a lot of excitement around the program. Illinois is close to home, and I grew up a big fan of Illinois.

"Everybody knows that Kansas is a great program. I just like the school. Plus, I'm good friends with Sherron Collins and Julian Wright."

Little will visit Kansas State on Sept. 14 and Illinois the following weekend. He has not yet set a date for a visit to KU, but told Rivals it likely will come before the K-State trip.

This is interesting. This is the first I've heard of Little, and the first serious JUCO prospect that I can recall for some time at KU. Can't say that I agree with his comments about KSU 100%. Yes, they have brought in a couple of good players, but the driving force behind that recruiting is obviously gone. His outlook may change after Sept. 14.

I'm glad Self is at least recruiting the JC scene. If HS guys aren't planning on staying 4 years anyway then you may as well find some players who have some experience, along with better physical development. I remember when JC guys were considered to have such attitude problems but after prima-donnas like Downs and Giles... I welcome this option.

What an odd list of finalists. Two schools in Kansas and one in Illinois. He's (Little) in Florida, from Chicago and wants to go to KState/KU/Illinois. Just weird...

Who is this cat and is he someone KU has had on their radar? 6'5"... who would he fill in for? Are we thin in that area? Why'd he go to a Junior College after high school instead of a Div1 school? What's his background? Is he another Jeff Graves?

Not sure what the whole story is on Little. I don't know a lot about him, but from what I've read he's a bit of a legend in the Chicago prep scene. It appears that he was a partial academic qualifier out of high school, so he went the juco route. Originally visited Illinois while in high school, but that didn't pan out for whatever reason (academics probably, though he never did sign).

He's a scorer, so that would fill a need, although we already have Releford coming in at the wing. They list him as a small foward, though and Releford is a true 2 guard. We may be thin in that area and, since he's a juco guy, it doesn't hurt us for getting Xavier Henry later on.

Why do they even bother with list like this (best mascot) when they don't even evaluate the subject matter on that very criteria?!? Bone-heads...

here's a recent article about Little. Seems like a natural Basketball player and could be useful.

This sentence might explain a lot regarding their choices.

"Compiled by the staff of CollegeFootballNews.com, here are the 25 best mascots, or more to the point, the most identifiable symbols in college football."

We're not quite there yet in the football regard. Soon, I hope.

tis4~ Thanks for the insight. I understand their angle based on your rationale... I just think they are still bone-heads.

If they wanted to evaluate the most storied programs in football or whatever, okay, I'll give them that. But when they start to construct a list based on mascots, there is none other that can compare to the Jayhawk.

There is an article about Self touring the new College Basketball HOF/Experience at the new Sprint Center in KC in today's KCStar.

It wraps up the description of the place referencing two players from NC and their position on the building (BIG... I'd suspect). Two players from a team that engineered the demise of Matt Daugherty as their coach, two players instrumental in creating the maelstrom that was the 'coaching catastrophe' responsible for re-opening the door for Roi to 'go home.'

There is no mention of any KU ties to this building during this article... no mention of Naismith, Wilt, Manning, nothing. Conspicuous in their absence to say the least but to omit them AND talk about that cluster-crunk from NC in the same article got me steamed.

I'm in your corner on this one too. The ONLY reason the Jayhawk was probably left off the list is the football stipulation. Other than that, there is no mascot so unique as the Jayhawk.

Lebowski, I agree a talented Juco transfer could be nice to fill in immediately next year.