Former back to be 15th inductee

Running back John Riggins played at Kansas University from 1968-70. Already a member of the Pro Football Hall of Fame, Riggins compiled 2,659 rushing yards at KU.

Former Kansas University running back John Riggins will have his name added to the KU football Ring of Honor at Memorial Stadium this fall.

Riggins will be the 15th player added to the Ring of Honor when Kansas plays Baylor on Oct. 13 at Memorial Stadium. He'll be the second this season - former linebacker Willie Pless will be added Sept. 1 during the Jayhawks' season opener against Central Michigan.

A standout running back at KU from 1968-70, Riggins compiled 2,659 rushing yards and 19 touchdowns in his career, including a 1,131-yard campaign as a senior in 1970. He helped Kansas to the Orange Bowl in 1968, earned an invitation to the Senior Bowl after his college days were over and went on to a lengthy NFL career with the New York Jets and Washington Redskins.

Riggins was inducted into the Pro Football Hall of Fame in 1992, after compiling 11,352 yards and 116 touchdowns in his 14-year career. He joined Gale Sayers and Mike McCormack as the only Jayhawks to be enshrined in Canton, Ohio.

The Centralia native is perhaps best known for his performance in Super Bowl XVII in 1983, when he led the Redskins to a 27-17 victory over the Miami Dolphins by rushing for 166 yards on 38 carries, including a 43-yard touchdown in the fourth quarter that put Washington up for good.

Riggins to be added to Jayhawk Ring of Honor

In 1968, running back John Riggins helped lead the Kansas Jayhawks to the Orange Bowl. Forty years later, the former NFL great is being added to the KU Ring of Honor.

Riggins, 58, now works as a drive-time sports-talk radio host in the Washington area, where his motto is "I used to run my legs. Now I run my mouth."

Fans will be able to watch the end of practice, and at the conclusion, children will be invited onto the field to participate in drills and stretching exercises. KU players then will sign autographs on the field.

Fans are asked to enter and depart on the west side of Memorial Stadium.The west-side ticket office will be open during the event for those wishing to purchase single-game or season tickets. 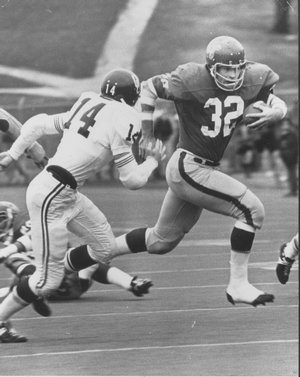 Former Kansas University running back John Riggins (32) runs against Oklahoma. Riggins will be inducted to the KU Ring of Fame on Oct. 13, at KU's game against Baylor. 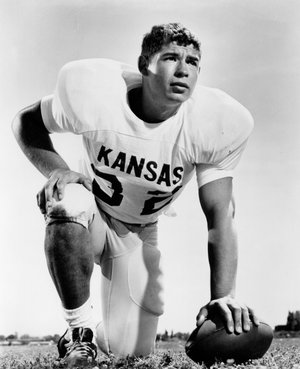 Running back John Riggins played at Kansas University from 1968-70. Already a member of the Pro Football Hall of Fame, Riggins compiled 2,659 rushing yards at KU.

Well it's about time!!! As a transplanted Jayhawk in the DC area, I have been wondering what has taken so long. When I first got here, I heard Riggo on the Radio and he consistently talks about his days at KU and going back to Kansas to hunt and fish. My dad remembers competing against him in high school as well (can't wait to call in about that one!).

Not that a player's pro years should have an effect on college acolades, but with 3 NFL hall of famers, KU is tied with OU and Nebraska and is one shy of Big 12 leader Texas. Considering their histories as college programs, that's pretty remarkable!! Long story short, Riggo is long overdue and I'm glad strides are being made to bring him back into the fold. Taking care of our own and grooming our history can go a long way with recruiting, just like the basketball team does. Keep the family strong!

BTW, listen to his show on http://www.triplexespnradio.com from 4-7 EST. Lots of Redskins crap but they do talk college ball and have an email segment at the end. Send him a congrats!!

My days of being a KU fan started in 1970 at a KU football game. I was pretty young so I did't recall the player's names and didn't put everything together, but I was a huge fan of the Jets and most especially John Riggins. He was an amazing run back. I'm really looking forward to seeing him on October 13 when his name is added to the ring of honor.

I don't understand the evaluation process but they apparently are not considering players in chronological order. Maybe Riggins notoriety is based primarily on his NFL career, but isn't that career a reflection of his college days. That's the equivalent of not acknowledging a KU alum who excels in his or her profession because they are no longer attending classes. Waiting 15 years after his induction into the NFL Hall of Fame seems like a glaring omission to me.

I completely agree--better late than never I suppose

Can someone logically explain to me how the powers-that-be didn't allow Riggins onto the ring of fame until 15 years after he was inducted into the NFL HALL OF FAME!!! No offense to Willie Pless, I watched him play also and for his size he was awesome, but Riggins is and has been a legend in college and the NFL, Pless, the Canadian Football League but he's been on the ring of fame 10 years??? It just don't compute!!!!

It was a matter of a really bad policy here at KU for a long time that was finally repealed.

They softened the rules of who should be considered in basketball first because they were keeping Wilt Chamberlain of all people out of the rafters over a stupid policy. The powers that be then realized that the same should be done for football. Some of the names of KU's past were ignored nationally because they weren't on national championship teams, but that doesn't mean that you shouldn't honor the individual achievments of incredible athletes.

Congrats to Mr. Riggins, you will finally get the respect that you deserve here at KU.