Of course it's about the money, which is perfectly fine. A college basketball player's decision to make himself eligible for an NBA career had better be about the money. Otherwise, it doesn't make sense.

If the projections Wright and coach Bill Self have been given - that he should go somewhere in the first 16 picks - are accurate, he'll be guaranteed big money.

For Brandon Rush, who as expected has declared himself eligible for the draft, it only makes sense if he leaves himself a path back to Kansas University. If he doesn't blow away scouts in late May at the pre-draft camp in Orlando, and in subsequent days during workouts for individual teams, he shapes up as a second-round choice. That path back to KU lies in going to class the next two months and getting passing grades.

"Guys who flunk out of school really murky the waters for themselves," said Jim Clibanoff of Clib Hoops, a scouting service to which roughly half of the NBA teams subscribe.

Aside from costing their schools the points needed to maintain scholarships, such players raise serious flags about whether they have the character and commitment to withstand a grueling NBA travel schedule and long stretches on the bench. 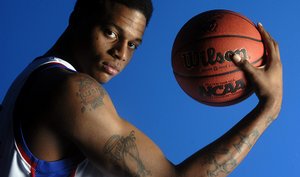 Asked if Rush and Wright would be hurting their draft positions if they blew off the remainder of the semester, Clibanoff answered before the question was finished.

"Absolutely," he said by phone from his Philadelphia office. "Absolutely. And there will be agents out there encouraging them to do that. They'll tell them, 'How can you not put your best foot forward? Blah, blah, blah.' It's very important they finish school."

If Rush were to drop out, he would be taking a gigantic step backward and would be erasing much of the progress he made in minimizing the negative image he took with him to Kansas in the first place.

Clibanoff sounded a little perplexed at Rush's decision, but said, "It's early in the process. Projections can change a lot in the next several weeks."

He added this year's draft is far deeper with talented wings than next season's now looks on paper.

"If he goes back to school, he's a year older, a year more mature, and maturity has always been a question mark with Brandon Rush," Clibanoff said. "It seems he's, pardon the pun, in a rush. Isn't it better to go to a team after your junior year that needs you as opposed to going early in the second round to a team that doesn't really need you, cuts you, and leaves you on the outside looking in?"

Rush is gambling, and could be leaving millions of dollars on the table.

Meanwhile, millions are expected to be leaving Kansas City and coming to Lawrence in the form of a multi-million dollar donation to the KU athletic department from the Ward family, noted for its generosity toward Kansas athletics.

You hit the nail on the head with this one. There's a lot of complexity in the situation that most of us novices either don't know or fail to recall. I hope Rush is going to classes and taking them all seriously, although I hear he's enrolled in courses that my second-grader could pass. I like Brandon. In the end he will do what's best for him, but I think he will always take a love for KU with him.

A thought I had was if he didn't test the NBA waters this year, he may be up at nights wondering if he 'shoulda', 'coulda'... I'm sure he also has had an earful of advice from many people telling him what he should do. At least he left himself a way to come back if the situation does not pan out to his satisfaction--and what a great motivation to not get what one wants. He may come back a man possessed to make his game better, and what an opportunity with all our bigmen, all our great guards, and without Julian, it would be B.Rush in the middle of it all with the perfect stage to earn a lottery pick next year. Hope it works for ya either way, Brandon. Good luck!

This is a solid article. I can do nothing but concur with the thoughts illustratred here.

It would be foolish for Rush to anything BUT return to KU next season and make the impression that everyone knows he's capable of.

He isn't being foolish to 'test the waters' right now because I think he is just getting a feel for what the pros are going to be looking to get from him in the future. Once he gets their perspective, he'll return to school, work on those facets of his game and declare next Spring (after we win the National Championship on the 20 year anniversary of our last one).

I think B Rush is gone, possibly to a team in need of an athletic wing...like the recently deposed defending champion Miami Heat. Or maybe the very much in trouble defending Western Conference champ Dallas Mavericks. Both of these teams (and many others) have had problems defending athletic wing players. That's something B Rush does well. The last few weeks have only solidified my belief that he will get drafted in the late first round.

Does anyone else notice that the last paragraph of this article has nothing to do with the rest of the column?