Amanda Costner executed what she called a "tough up and down" for a par on the 13th hole to avoid losing a sixth stroke to par in a short stretch Wednesday in the final round of the Big 12 Conference golf championships.

"After I hit that 10-footer for par, I went into the restroom, recollected myself and said, 'You can do this. Stay calm. You can win this thing,''' Costner said by teleconference from Waco, Texas.

She wasn't lying to herself.

A Kansas University senior from Claremore, Okla., Costner became the first women's player in the school's history to win an individual conference title. She shot a 5-over-par 77 in the third and final round Wednesday to finish 5-over for the tournament. Texas A&M's hard-charging Ashley Knoll finished with a 71, good for second place, three strokes behind Costner's 221 total.

After two rounds, Costner held a seven-stroke lead. She posted the lowest score on each of the first two days under windy conditions at Ridgewood Country Club.

Before the lavatory oratory aimed at herself, Costner was playing erratic golf, endangering her big lead. She lost five strokes to par in a five-hole stretch that ended with her double-bogeying the par-4 11th hole.

"As soon as I doubled 11, my nerves were probably the tightest they were all day," Costner said. "I was frustrated. All these thoughts are going through your head. Luckily, I was able to overcome that."

"It's been hard," she said. "Two years since the win, working hard, waiting for it to come together, it not really happening. You wonder: Is there something I'm doing wrong? Winning this makes it all worth it." 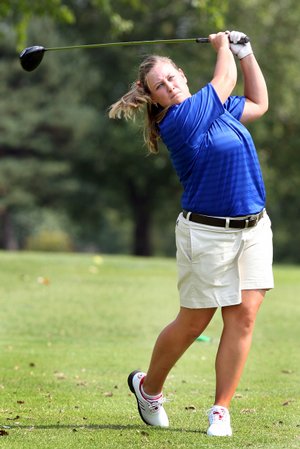 Costner wasn't the only one from KU to struggle during the final round. As a team, Kansas dropped from fifth to ninth place Wednesday.

"Ninth is not where we want to be," KU coach Erin O'Neil said. "We have a young group, and I am excited about the future."

Costner was the only Kansas golfer to break 80 on Wednesday.

Costner, who birdied the par-5 18th all three rounds, said scoring a birdie on the final two holes of the first round gave her confidence she could win the tournament. She also gave credit to her father, William Rodney Costner, for straightening out her recent putting woes by advising her in an e-mail to keep her head down and maintain her triangle throughout her putting stroke.

"I can always count on him to tell me the truth," Costner said.

The men's Big 12 championships are scheduled for Monday (36 holes) and Tuesday (18 holes) at Prairie Dunes in Hutchinson.

Senior Gary Woodland, playing the best golf of his career, is a contender to win the individual title.

"He is an amazing player," Costner said. "I have every confidence he will go out there and win their Big 12 championship. I'm putting all my faith in him to win that for them, too."