The shirtless shoulders were turning pink, and it seemed every Kansas State student hanging around had a drink in hand.

The parking lot next to Bill Snyder Family Stadium was full, with music blaring, grills smoking and footballs being thrown around all day.

One would think Nebraska was in town for a huge gridiron tilt.

Not so. It was April.

Instead, the K-State faithful were tailgating all day for the spring game one year ago, a way for Wildcat fans to get their football fix with coach Ron Prince's inaugural season still five months away.

Kansas State, like many other schools, tries to make the spring game a must-see event. Last year's scrimmage was moved to prime time. K-State's baseball team played Kansas University right next door during the day. There was a battle of the bands, a barbecue contest and a carnival midway for fans while the sun was still out.

The day's success was hard to ignore - 31,875 fans showed, including some prized recruits who had to be impressed.

"We made this an unbelievable party," Prince said afterward, "and a game broke out."

It proved just how successful the spring game can be in the Big 12 Conference.

Just down I-70, KU is trying to generate such interest, but the turnout just hasn't been there like at other schools. Sunday, a majority of Memorial Stadium will be inaccessible for this year's scrimmage because the seats won't be needed.

In 2006, an estimated crowd of 5,200 showed up to see the first glimpse of promising freshman quarterback Kerry Meier. The 2005 game had an estimated 3,000 fans in attendance, and that team ended up winning a bowl game.

KU athletic-department officials have noticed and are working toward amending it before Sunday's 3:30 p.m. game at Memorial Stadium. 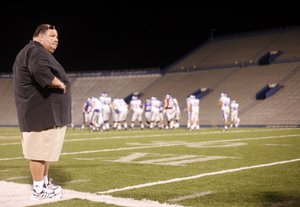 With plenty of empty bleachers as backdrop, Kansas University football coach Mark Mangino watches the scoreboard in the waning moments of last year's spring game. An estimated 5,200 fans attended the scrimmage, a number on which the KU administration would like to improve.

But they realize they have a long, long way to go.

"The numbers aren't nearly where we want them to be," associate athletic director Jim Marchiony said. "My guess is they really never have been."

Kansas certainly isn't alone in struggling to bring fans to the spring game. But the disparity between turnouts among Big 12 schools is staggering.

Seven of the conference schools play their spring games today. Only two have finished their seasons to this point: Texas, which drew 42,500 fans to its scrimmage March 31, and Oklahoma, which had a turnout of 21,020 for its game April 7.

Nebraska is aiming for 60,000-plus fans for its game today. It had 57,415 at last year's game, though fans were turned away because part of the stadium was under construction.

Though Texas, Oklahoma and Nebraska all are top-25 football programs - and Kansas State recently was, too - they're also KU's conference rivals both on the field and in recruiting.

Kansas officials are well aware of the ground they need to try to make up.

"It's similar to the regular season," Marchiony said. "We need to do what we can from an administration standpoint to supplement the efforts of the coaching staff and the players. It's an effort by all of us." 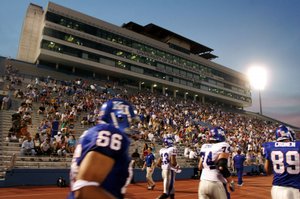 To start, Sunday's spring game will be available on the Jayhawk Radio Network for the first time this year, and increased advertising in local newspapers and Web sites is designed to get the word out. As always, admission is free.

And like every year, KU coach Mark Mangino is working to make his product on the field more appealing. He said there's not much more for him to do.

"I've got all I can do just coaching the football team," Mangino said last month. "Marketing aspects and things like that aren't my cup of tea. I don't think I'm the one who should drive that vehicle.

"But I think that there has been some talk about doing some things to promote the spring game, try to get it more exposure. I think our administration is working on it, but I don't feel that's something I need to drive."

Making it an event

Kansas State coach Prince, however, did feel it was something he needed to drive.

KSU associate athletic director Casey Scott said Prince approached the administration soon after being hired and talked of his vision for making the spring game a big party for K-State supporters. In the past, it was usually just an ordinary day when coach Bill Snyder was in charge.

"Under coach Snyder, we were probably (drawing) anywhere from 12-15,000 or 10-12,000," Scott said. "Coach Prince came to us and clearly let it be known to us that he wanted to make it a major event. He wanted to have the purple nation come together in the spring.

With the annual Spring Game nearing for the Jayhawks football team, the coaching staff will be busy as ever trying to determine which QB will be the starter for the upcoming season.

"He utilizes the weekend as a big recruiting weekend, which was important to him. We worked with his staff to develop a special day - not just an intrasquad scrimmage."

In Lawrence, KU had an alumni game before the real game from 2004 to 06, with former players like Dana Stubblefield, Don Davis and Don Fambrough taking part. That was nixed this year in favor of a hot dog tailgate party featuring former players.

Also, there will be more interactive inflatable games for family entertainment, and T-shirts will be passed out to the first 5,000 in attendance. Like in past years, posters and schedule cards will be given away, and one fan will have an opportunity to win a 2007 family-plan season-ticket package.

"As we go on," Marchiony said, "we'll probably add things year by year."

It's crucial. Inter-school competition for the best facilities, the best coaches and, ultimately, the best recruits have proven that there's an edge to be had almost everywhere.

The popularity of the spring game is no longer an exception.

"We have to do our part," Marchiony said. "We can't just sit and assume that even as the program gets better, the people will come.

"There's not the history of people doing that yet, so we have to do what we can to create that."

One thing what might help is moving the game back to a Saturday. A Sunday late game is hard on people and families who have to travel out of town for the game, and get back late Sunday night and have to workt he next day.

If the athletic department wants more people it should consider a Saturday afternoon timeframe. Those of us who live more than 100 miles from Lawrence will not attend on a late Sunday afternoon. I don't understand the thinking here.

yeah, i don't understand the move to sunday, either ...

i'm coming with family and maybe a few friends in tow!

This event will be a failure because of our lack of continuity in football. While we have some recent success just give it some time and it will blow up. The administartion is fixated on basketball and quite frankly we need to play to our strength. Also we have a person as HC who is not the model our great university needs. He needs to go. Oh well see you at the game.

i see the downtown business district is really busting their collective rears to encourage more people to come. or are they too busy protesting the new wal mart to try and attract more out of town business to downtown?

i think our administration is more fixated on MONEY than one particular sport - which isn't necessarily a bad thing.

football can become the cash cow, even if hoops may lead it in attendance ...

i think that this season is make or break for Coach Mangino, he's been here five seasons, enough to have his own players ...

Two bowls aren't bad, but last year - man, they should have finished 2nd OR even won the North!

Yep, big season for coach Mangino. Not only does he have his own players but he couldnt have an easier non-conference schedule as well as playing the softer 3 teams in the south. Important season for Mangino and the program.

One more idea that may draw some more fans...when Bob Stoops came to Oklahoma, be embraced the past and welcomed back the Brain Bozworth's, the Solomon brothers, and Barry Switzer back to the Oklahoma program. Why can't KU and Mark Mangino, who was Oklahoma during that time, do the same. Yeah yeah they brought back Dana Stubblefield, coach Fram for some alumni games, but there are other great Jayhawks that KU should try to contact! Why can't Gayle Sayers come, or John Riggins, or Nolan Cromwell, get involved with the game and fans. John Hadle(? sp), Alvin Walton, LeRoy Irvin, Tony Sands, or Mike Norseth. There are Jayhawks who made an impact not only for Kansas, but in the NCAA record books and the NFL, and I think fans would like to see more of them.

It seems hopeless to me. Bringing recruits in to see our spring game would convince them that we don't have much enthusiasm for the team... which doesn't generate much enthusiasm without bringing in recruits... there's a hole in the bucket, dear Liza... and we have a coach who openly disdains generating enthusiasm? wow. I know he's busy, but this is a pretty big piece to the puzzle to push off on someone else. Maybe we need a bandwagon Czar.

I think saying Mangino "disdains generating enthusiasm" is a little harsh - but there has been more of a concerted effort in going after the student body than alumni.

While this generates a better game environment, it doesn't do much for the department coffers.

Bring in former players is a great idea, i don't see Gale Sayers coming back though, because he has his big golf tournament in town during the fall ...

OK, so ... football has all those folks, particularly Sayers; hoops has many stars, notably Wilt Chamberlain & Danny Manning, even women's hoops has Lynette Woodard ...

But does KU baseball have any star power?

magnino does bring those guys in....homecomming last year guess who was in attendence, thats right...gale sayers

some guys are way too busy to come in, like cromwell who is up with the seahawks. but for the most part, all the guys who mangino could get to come, have.

maybe he should let emeritus Coach Fambrough address the crowd, holy cow - i heard this guy's pep talk before the trip to KU/Missouri last fall ... it made ME want to run through a wall!

also, they are going to broadcast on the radio for the first time (i wonder if Bob Davis will be with the Royales or not?)

i don't know if anyone charges ...

I saw that South Carolina's was on ESPN-U today!

wonder if South and North Carolina will try to meet up now that it would be Spurrier versus Butch Davis ... Clemson is more SC's rival, right?

does the spring game tomorrow cost money? if so, how much?

That is one giant dude.

He looks like a total eclipse of the sun, in that black shirt.

Clemson is SC's rival always joke with a SC buddy that it is actually nastier than Mizzou!

I weigh almost 300 lbs, I stood next to Coach Mangino and felt small ... but he is SOLID, I tapped his shoulder for a pic, and it was like patting a boulder!

/I wished that replicas of that sweatervest were available to buy!