Marlon Lucky ran for 156 yards and three long touchdowns and Kenny Wilson ran for 106 yards and two scores in No. 23 Nebraska's 56-0 victory over Troy on Saturday night.

It was a dominating performance by the Cornhuskers (3-1), who had been criticized for coach Bill Callahan's conservative offensive game plan in last week's 28-10 loss at Southern California.

Held to 211 yards last week, the Huskers blew past that total early in the second quarter on their way to a season-high 597.

Zac Taylor was 14-of-17 for 268 yards and a touchdown before giving way to Joe Ganz in the middle of the third quarter. Terrence Nunn caught four passes for 102 yards.

The Huskers had nine plays of 20 yards or longer. Three of them were Lucky touchdown runs of 34, 45 and 51 yards.

On Troy's first four possessions alone, the Trojans were flagged for intentional grounding, two illegal formations, a false start, holding and offensive pass interference. They were penalized 10 times for 80 yards.

Nebraska scored on four of its first five possessions and led 28-0 at half.

Lucky opened the scoring on the game's first series, hitting the corner and accelerating past free safety Tavares Williams on his way to his 34-yard touchdown. 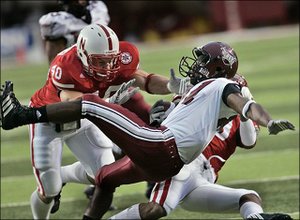 Nebraska's Lance Brandenburgh (40) and Rickey Thenarse, back right, drag down Troy's Mykeal Terry, in the first half of their college football game in Lincoln, Neb., Saturday, Sept. 23, 2006. Nebraska beat Troy, 56-0.)

Taylor, after a 49-yard pass to Nate Swift on first-and-35, found J.B. Phillips alone in the end zone for a 6-yard TD. Lucky's 45-yarder came after he broke through a hole at the line of scrimmage and outran cornerbacks Elbert Mack and Henry Chubb.

Wilson's 3-yard run ended a 12-play drive late in the half, and Lucky opened the third quarter with his 51-yarder up the middle.

Ganz threw a 1-yard touchdown pass to Matt Senske and Brandon Jackson and Wilson finished the scoring with 8-yard runs in the fourth quarter.

Taylor threw his first interception in 84 attempts when Justin Bray picked him off late in the first half.

Josh Allen led Troy rushers with 39 yards, and Omar Haugabook was 12-of-21 for 88 yards with an interception.