Sandra Arthur was in town a couple weeks ago.

The drive up from Dallas had nothing to do with her son - Kansas University freshman basketball forward Darrell Arthur - being homesick.

"I got my teeth pulled that weekend. She came to check on me," explained the 6-foot-9, 230-pound McDonald's All-American out of Dallas South Oak Cliff High, who had his wisdom teeth extracted Sept. 1. "I didn't have to have any stitches. It went well."

A late-week trip to the oral surgeon went so well Arthur was able to accompany his mom to KU's season-opening football game against Northwestern State. The two sat with Darrell's KU teammates in the Jayhawk student section.

"She liked it. She said the game was crazy," said Arthur, glad to spend some quality time with his mother after not speaking with her as much since early June, when he first left the nest for summer school.

"I am pretty much over it," Arthur said of typical freshman homesickness. "I call my mom less now that I'm here. Hanging out with the guys, I keep my focus away from home. I keep my focus here."

Arthur has been diligently working on his body - he's put on 10 pounds of muscle the past 31â2 months - and his game while participating in unsupervised pickup games with his KU teammates four times a week.

"Speed. It's fast," Arthur said, asked the biggest difference between the high school and college game. "You have to think more now on the court. The players are so fast. Players anticipate what you are trying to do. If you make a lazy pass, it gets stolen."

Arthur - who plays both center and power forward during pickup action - defends returnees Sasha Kaun, C.J. Giles and Julian Wright during the scrimmages. 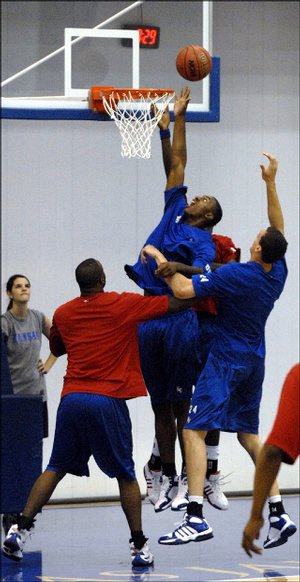 Kansas University freshman Darrell Arthur goes up for a putback attempt over the other Jayhawk big men. The Jayhawks held a blue-and-red scrimmage in mid-June at the Bill Self basketball camp in Horejsi Family Athletics Center.

"Darnell (Jackson) and I are usually on the same team. We switch it up," Arthur said.

University of Texas freshman forward Kevin Durant was the toughest player Arthur ever had to shadow before college. That honor now goes to the 6-8, 225-pound Wright.

"Julian is versatile. He can dribble, pass, shoot, jump. He has some great jumping ability," Arthur noted.

"He has a nice inside game, nice go-to moves," Wright said. "He plays inside a lot, but steps outside to show his perimeter skills. He is a good outside shooter.

"On defense, when he gets going, he alters shots," Wright added. "A lot of players try to block everything. Sometimes it's just as good to alter a shot and try to get the rebound."

Wright said Arthur (his first name is pronounced 'Dur-rell' with the nickname 'Shady') would contribute immediately.

"I know one thing. He has experienced success before. He has tasted it at the high school level," Wright said of the player who led South Oak Cliff High to a pair of state titles.

"He knows how to win so he brings a lot of that to the table. He is a hard worker. No one on this team will let him take a day off because we know his potential, how good he can be, how much he can help this team."

Arthur is ready to help in any role, while realizing there's a chance he could be tapped a starter from Day One.

Arthur will be a candidate for preseason freshman of the year in the Big 12 with point guard teammate Sherron Collins and Texas' Durant.

"I've not thought about that. If it happened it would be a great honor to achieve," Arthur said, lauding the above-mentioned duo.

"Sherron is a pit bull. He locks down on defense," Arthur said. "He can dribble, handle the ball, can see the court, has good passing ability, can shoot the outside jumper. He is a good, complete guard.

"Kevin runs the court well," he added of the 6-9 graduate of Montrose Christian School in Rockville, Md. "It's hard to keep up with and guard him on the perimeter."

Arthur said he's not thinking about another personal matter - how soon he'll pack up and leave for the NBA.

¢ Recruiting: KU coaches on Thursday watched an open workout of Romero Osby, a 6-7 junior from Meridan, Miss. He also likes Mississippi, Auburn, Alabama, Georgia Tech, Florida, Memphis, Tennessee, North Carolina and others. ... Jon Leuer, a 6-10 senior from Orono, Minn., received an in-home visit from KU coach Bill Self on Sunday. He said he might visit KU the first weekend of October. "Kansas is a school that I definitely have a lot of interest in, so I would like to get down for a visit and get a better feel for the school and community," he told rivals.com. Leuer is considering KU, Louisville, Minnesota, Iowa State, Notre Dame, Indiana and Iowa.