"I expected everything to be pretty smooth the first couple of weeks," he said this week, "and it turns out it wasn't."

Taylor comes into this season as a known commodity, arguably one of the top quarterbacks in the Big 12 Conference.

The belief is that as Taylor goes, so go the No. 20 Cornhuskers, who open today against Louisiana Tech.

The senior finished last season with two touchdown passes in seven of the last eight regular-season games. He threw three TD passes in the Alamo Bowl victory over Michigan.

Unlike Nebraska quarterbacks of the past, mobility is not his strong suit. But Coach Bill Callahan and offensive coordinator Jay Norvell, both of whom came to Lincoln from the NFL, say Taylor makes throws that some pros can't. And, they say, he has a strong presence as a leader.

"We say that he's progressed very well in the course of practice, and you can see it statistically," Callahan said. "When you're talking about game comparisons, we're going to have to wait and look at that as it sorts itself out. He's done as excellent job. He's more accurate. He's got better understanding. He's handled more volume." 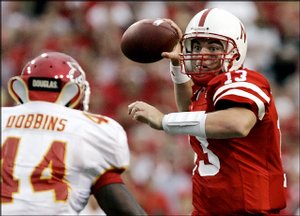 In his first three games as starter, Taylor completed only 43.8 percent of his passes, with one touchdown and three interceptions.

"The thing I remember about the first couple games was I was uncomfortable in the pocket," Taylor said. "I was making throws too soon and I was really inaccurate. Those are things that come with experience and playing more games."

Taylor said the offense began to click for him in the fourth game, when he hit on 36 of 55 passes for a school-record 431 yards in a 27-20 double-overtime victory over Iowa State. He threw two touchdown passes and no interceptions.

Still, after nine games the Huskers found themselves 5-4, and questions abounded on whether Callahan and his West Coast offense were right for Nebraska.

Taylor passed for seven TDs in season-ending wins over Kansas State, Colorado and Michigan - a finish that catapulted the Huskers back onto the national scene.

Taylor said it was only a matter of time before he felt comfortable running the offense.

"We played nine games, and things started to slow down and we had better chemistry with one another," he said. "Everybody's more comfortable. The receivers are more confident in their route-running. We know this playbook a lot better. We know what's expected in certain situations. We have a better understanding of each other."

Taylor spent the summer concentrating on his foot work and reading defenses. Those efforts, plus an improved offensive line, should help Nebraska allow fewer than the 38 sacks given up last season. He said his goal was to complete 65 to 70 percent of his passes.