Sophomore Chalmers savvy beyond his years

Given the way Chalmers finished last season - his freshman year, by the way, making him just a sophomore - it perhaps is easy to see why the throat was confused.

Chalmers, too polite to correct the talking head, rattled off a concise if not especially profound response about being a year older and wiser.

"I know what to expect," he said. "I know how things go. I'm just trying to focus on the season ahead."

The season behind wasn't too shabby.

Though he struggled a bit at the start, the versatile 6-foot-1, 195-pound guard from Anchorage, Alaska, finished with a flourish.

Chalmers scored in double figures in just two of KU's first 11 games, including a one-point, one-assist, six-turnover clunker against California.

As a result: Chalmers ranked second on the team in points per game (11.5 overall, 14.3 in Big 12 Conference games); was named Most Outstanding Player of the Big 12 tournament, where he averaged 16 points, 4.3 rebounds and 5.3 assists in Kansas' run to the championship; and, at year's end, shared the team's Clyde Lovellette Most Improved Player award with classmate Julian Wright. 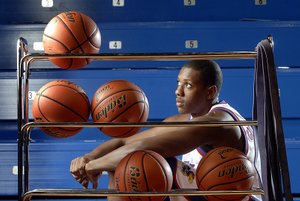 Sophomore guard Mario Chalmers will team with junior Russell Robinson in the Jayhawks' starting backcourt again this season. Chalmers was second on the team in scoring last season and was named Most Outstanding Player of the Big 12 tournament in Dallas.

Despite his strong finish, there's no guarantee Chalmers will be as indispensable a part of the KU backcourt this season.

Not that Chalmers is particularly worried.

"Sherron will get a lot of playing time. It's just like last year, when we had 'Hawk,'" Chalmers said of graduated Jeff Hawkins. "Sherron's just taking Hawk's spot."

To ensure Collins doesn't take Chalmers' spot, Chalmers had a productive offseason, during which he concentrated on boosting his bench press and putting miles in his legs.

"I'm stronger, faster," Chalmers said. "I worked with coaches on defense, sliding my feet. And I worked on my shooting and just general conditioning, making sure I'm in good shape."

One thing he didn't have to work on was his ability to mesh with Robinson in the backcourt. That came naturally enough.

"I think the way we work together should carry over well from last year," Chalmers said. "We're hanging out a lot. We can tell where each other likes to be on the court. We kind of feed off each other."

Self said he thought Chalmers made great strides a year ago and would expect more from him this year.

"He surpassed our expectations to be clutch as a freshman, generate offense and defense," Self said. "He plays at a good speed. Defensively, he has very good hands. If it was up to him, he'd take everybody's ball away every possession. His hands have led to a lot of offense for us.

"He's good at shooting floaters as well as creating for himself and creating for others. He sees the game beyond his years."

Perhaps. But he's a sophomore, not a junior. That's what it says on the official roster, anyway.

Ya, don't rush him

I belive that this is Wrights team. I just hope he can handle it. ROCK CHALK IN THE LAND OF THE TIGERS. LETS GO KU!!!!!!

djkc28- I don't think you are really alone. A LOT of KU fans love Wright and Chalmers. While I think Rush is better than Robinson(hard to compare, seeing that they play different positions and have different roles), I agree that I would take Chalmers or Wright in the clutch over Brandon. Wright is the one to watch for. This guy could blow up big this year. Could be a fun ride this year. I just hope they take it a game at a time and focus. The tournament will come soon enough. I think this team wants to prove that last year's 1st rd. loss was a complete aberration.

I'm glad to see others share my feelings about Rush vs. Chalmers and Wright. For the last two months last year, I kept wondering why people continued to focus on Rush as being the best, even though he couldn't close the games in the clutch the way Chalmers could. And although Rush had a solid year, he seemed to stagnate a little, whereas Chalmers, Wright and Robinson all got better as the year went on.

But that seems pretty typical: once a player gets a reputation, that's the guy everyone focuses on. Another perfect example is Collison being first-team All-American and Hinrich not even making second team, even though I always thought Hinrich was the most valuable player on the team.

We live in Springfield. Moved from Lawrence.

I hope all the hype stays on Rush cause loosing Wright or Chalmers to the league would be more of a blow to the team then loosing Rush.... Don't get me wrong though, I like Rush but he seems a little over hyped... Hopefully he proves me wrong this year...