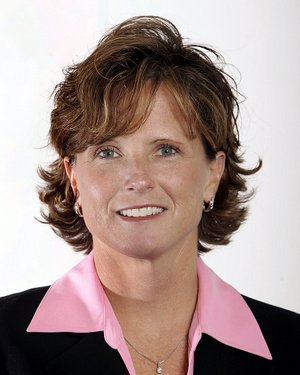 It's no accident that crowds at women's basketball games often are filled with extremely experienced spectators of the sport. It reminds many of the days when basketball was played below the rim by everybody.

"I talk to a lot of people, whether men or women, they'll relate our game to what the men's game was like in the '60s," Kansas University women's basketball coach Bonnie Henrickson said. "It's possibly a more fundamental game than the game the men play. It's a style that requires a little bit more teamwork. We don't have so much one-on-one, generally speaking, where you overpower someone, or take off from eight feet away and throw one down. The women's game requires more teamwork, passing, screeing, using screens, making the extra pass at times. It's not that you don't see a lot of that in the men's game, it's just that you see more of it on the women's side."

John Wooden, Henrickson pointed out, has said he prefers watching women's basketball for those reasons. Not that there isn't a down side to the dunk being such an oddity in the women's game.

"At times it's a disadvantage because of the uniqueness of the dunk," Henrickson said. "For the general population, the dunk is something they can't do. They watch our game and think they can play like we do, even though in many cases they can't, they think that. For some, the dunk makes the men's game a special attraction. And dunking is exciting. I'd like to be able to do it just one time."

Tennessee's Candace Parker did it not just once, but twice in the same game, last season against Army, and in so doing made history.

Henrickson said she didn't have any players who were threats to dunk, though 5-foot-6-inch Shaquina Mosley "could grab the rim a little."